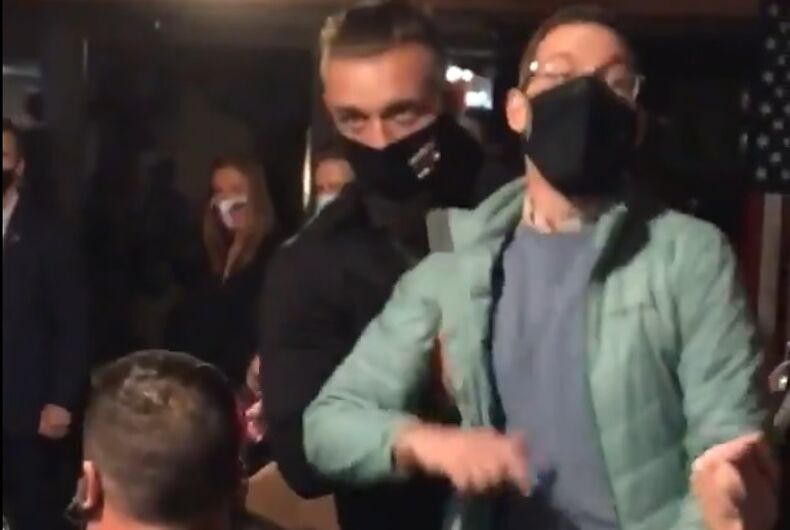 A protestor being led away at the LGBTQ Tiffany Trump event.Photo: Screenshot Twitter

Donald Trump’s daughter Tiffany Trump was heckled at a “Trump Pride” event held near Pittsburgh over the weekend.

After her unique performance at a gay Trump Pride event two weeks ago in Florida, queer Republicans in Pennsylvania got together for another speech. This time, protestors were ready.

Trump supporters packed into a small room, throwing social distancing guidelines to the wind at what appears to be a mask-optional event with Tiffany Trump and former U.S. Ambassador to Germany Richard Grenell.

THANK YOU PITTSBURGH! The crowd was fired up tonight for a Trump Pride Celebration with @tiffanyatrump and ⁦@RichardGrenell⁩ 🏳️‍🌈 pic.twitter.com/AvAiIx9XoM

The location of the event was shared online and LGBTQ protestors started shouting during Tiffany Trump’s speech, and the crowd started chanting “Four more years.”

One protestor ran to the stage and was pulled away by security. He shouted, “Fuck you, Richard Grenell.”

As that protestor was taken out, others started chanting: “Just because you suck cock, doesn’t mean you’re not a bigot.”

Thx @caseyjflores for offering to help me get back after using the bathroom being antifa is hard work pic.twitter.com/m7IaqorkO1

Back on Twitter, Grenell said that this was a sign that the “gay left in total panic.” He then said that 33% of gay people will vote for Trump, a much higher number than the only scientifically accurate poll on the matter but still pretty low when he could have made up any number, really.

Support for @realDonaldTrump from the gay community is unprecedented for any Republican in history.

We will see huge numbers – more than 33% support.

The gay left is in total panic.

Pete Buttigieg tells LGBTQ voters that “Help is on the way”

Even if Joe Biden wins, the Supreme Court will still wreak havoc on our rights