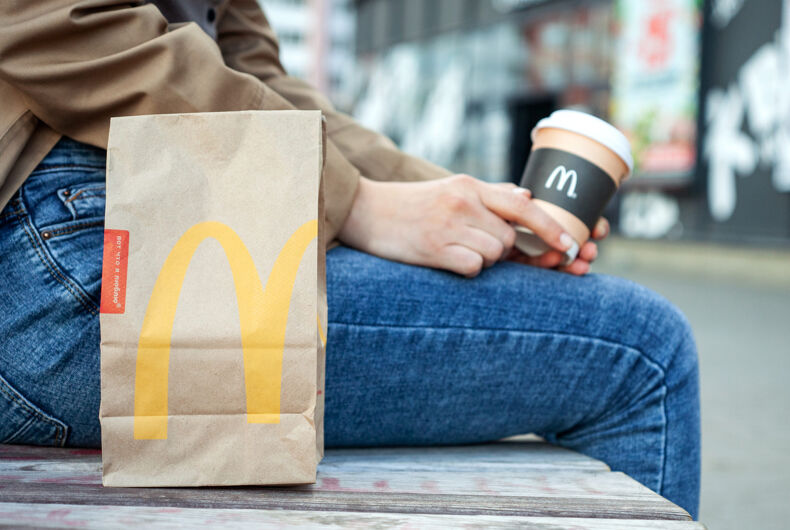 Heaven, a large “superclub” venue located in London that’s world renown for being home to the “G-A-Y” nightclub, was looking forward to reopening when COVID-19 lockdown restrictions are lifted. Initially, though, they did not qualify to.

London is moving to a “Tier Two”, or ‘high alert’ lockdown protocol, on December 2, in hopes of lowering infection spreading before the holiday season. Under those restrictions, hospitality venues can open – but only if they are serving “substantial meals,” which Heaven didn’t previously offer.

Related: Burger King & Ronald McDonald kiss in ad celebrating “everyone’s right to be just the way they are”

That is, until a nearby McDonald’s franchise decided to step in.

“G-A-Y” owner Jeremy Joseph revealed that the popular showcase would open on December 5 with performances from former X-Factor contestants Lucie Jones and Shanay Holmes. For the venue to open in compliance, orders for drinks must be accompanied with said “substantial meal,” and a McDonald’s franchise within walking distance – about 130 meters – from the venue reportedly “teamed up” to offer them.

After initially promoting the reopening event with a flyer complete with a McDonald’s logo, the images were apparently deleted and reposted without the logo.

“The Show Must Go On,” Joseph later wrote on Twitter.

He claims that while the space “can’t be a nightclub” due to the restrictions still in place, “we can become the biggest LGBT bar in the UK.”

While some are excited for the G-A-Y to reopen, many expressed outrage in their alleged attempt to flaunt coronavirus restrictions. Joseph stresses that all Tier 2 restrictions will be enforced, and no more than groups of 6 – from “the same household or Support Bubble” – will be accommodated.

Joseph has criticized leadership in the UK government, and repeatedly “warned about the impact of government restrictions on his venues,” even taking several unsuccessful legal steps to prevent the coming restrictions from going into effect as they are “arbitrary and nonsensical.” He has also called the restrictions “crippling” for G-A-Y venues.

He has used his social media reach and that of his venues – which includes another G-A-Y club in Manchester and theaters throughout the country – to consistently slam Prime Minister Boris Johnson and ask followers to reach out to their representatives. “If you disagree with Tier you’re in or rules within your Tier, your MP votes on Tuesday,” he writes.

Other restrictions with Tier 2 include a 10:00 P.M. curfew, or 11:00 P.M. so patrons can finish their drinks and make their way home, based on a recent amendment by Johnson. “Mixing” of households is discouraged, as are extended travelling or overnight stays outside of “support bubbles.” Schools, workplaces, places of worships, and even weddings and funerals are permitted to open and take place.

London’s mayor Sadiq Khan has approved emergency funding for certain LGBTQ venues, but most others are left to try to survive the effects the restrictions will have on business.

Over the last two months until this week, Joseph and supporters of G-A-Y events had been regulated to virtual shows.

Since Joseph moved G-A-Y inside Heaven in 2008, they have welcomed the likes of Adele, Lady Gaga and One Direction. He became the sole manager of the venues and all entities under the G-A-Y Ltd brand in 2013.

The damage from the Trump presidency won’t be easy for Biden to undo. He’s not done either.