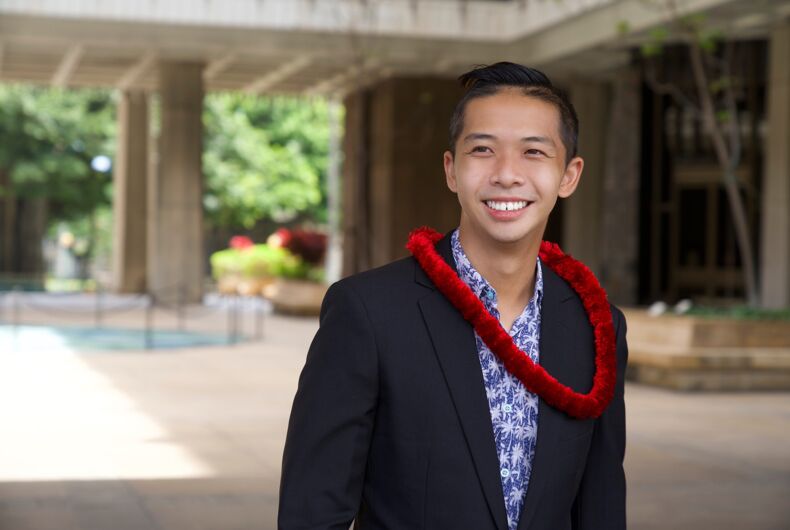 Hawaii’s Adrian Tam has not only been elected to become the only LGBTQ representative in the state, but he has also defeated Nicholas Ochs, a white supremacist and anti-LGBTQ leader of the neo-Nazi hate group, Hawaii Proud Boys.

“I am happy and very hopeful that members of the community realized [The Proud Boys] didn’t represent the values of Hawaii,” Tam told the Daily Beast. “Groups like these will always exist, but it’s up to us to not only tune them out, but to get our message out there and change minds so more people don’t join them.”

With a whopping 70% voter turnout in Hawaii, Tam beat Ochs with 63% of his district’s vote, while Ochs received 29.7%, The Honolulu Civil Beat reported. Tams, the Civil Beat continued, will also be part of a sizable group of new, young representatives. He will be one of three freshmen representatives under thirty-years-old.

Tam will represent Hawaii’s 22nd district in the state house. In August, he won the Democratic Primary against incumbent Tom Brower, who has held the seat since 2006.

Aloha,
We did it. I am grateful for the opportunity granted to me last night by the voters of District 22 to serve our community and our state as their representative. Thank you to all my supporters, volunteers, friends & family, and to the people of District 22. pic.twitter.com/IWHLvtcmCI

Just before he defeated Brower, Tam, 28, spoke with LGBTQ Nation about his plan to fight Hawaii’s rising cost of living and also diversify its economy so it is not wholly dependent on tourism. He is advocating for an investment in green manufacturing and technology.

“I’m just a local boy born and raised in Hawaii who desperately wants to call this place home,” he said. “But with everything that’s going on, with the high cost of living, with the rising housing shortage, homelessness, crime, and everything, it has become impossible for me and people like me with my resume to live here, and I’m going to fight to make sure Hawaii works for everyone and not just a select few.”

Tam has been advocating for Hawaii’s LGBTQ community for a long time. While working for Hawaii Sen. Stanley Cheng, he wrote a bill that would ban conversion therapy for minors in the state, which passed in 2018. He also helped an intern craft a bill banning the “gay panic” defense, which also passed.

“Hawaiians overwhelmingly rejected the politics of hate and finally restored LGBTQ representation to its state legislature. Adrian’s victory is part of a rainbow wave of LGBTQ people of color who won state legislative seats on Election Night and are paving the way for a more diverse and representative government.”

“When there are no LGBTQ elected officials in an entire state, it has consequences, both in policy and how young LGBTQ people view themselves. Adrian will ensure LGBTQ people are considered and prioritized in the state capitol and will inspire more LGBTQ people to run and serve.”

“I always say representation matters,” he continued. “I am glad that I can bring that perspective to the legislature when it comes to making decisions. I always say a legislature should reflect what a state looks like. I am glad to be the only one, but I hope I am not the last one.”