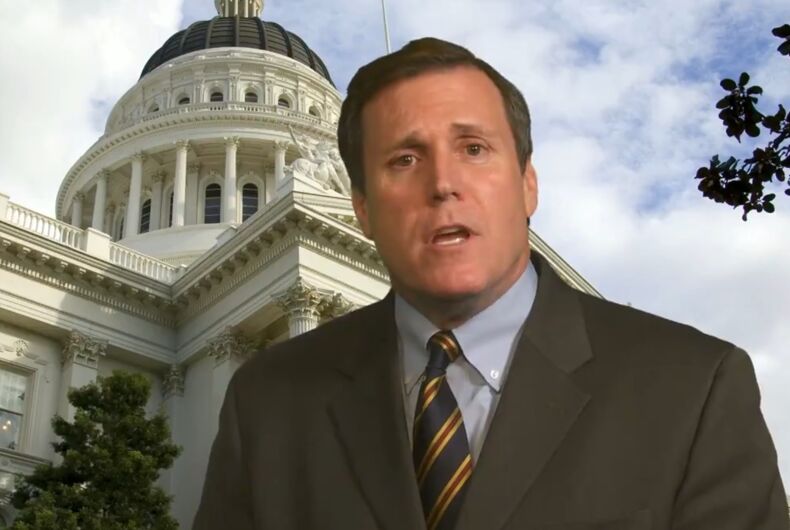 Scott Wilk impresses the kids with his rendition of a David Bowie hit.Photo: Screenshot/Twitter

A video made by a Republican lawmaker to attack transgender rights has resurfaced online as the politician faces reelection.

California Sen. Scott Wilk (R) made a video in 2013 that opened with him standing in front of a picture of the California State Capitol and reciting song lyrics.

“David Bowie in the 1970s had a great classic rock song ‘Rebel Rebel’ that included the lyrics ‘You’ve got your mother in a whirl, she’s not sure if you’re a boy or a girl,'” he said. “Well, the State Assembly doesn’t think it matters.”

“Recently, we passed AB 1266, which will require that students be allowed to participate in school activities and facilities based on their gender ‘identity,’” he said using air-quotes.

“If AB 1266 becomes law, schools will be forced to allow a male student to use a girls’ restroom or locker room if he identifies as a girl,” Wilk continues, misgendering the hypothetical transgender girl.

Brace yourself for some cringe, courtesy of CA State Sen. @ScottWilkCA.

Not only is this old video horrible to trans students, but he obviously doesn't know much about Bowie.

The bill did become a law. Signed by then Gov. Jerry Brown (D) on August 12, 2013, the School Success and Opportunity Act allowed transgender students to participate in sports and other gender-segregated activities with their gender identities, and it went into effect in 2014.

Wilk is facing labor attorney Kipp Mueller in the general election and a Mueller supporter posted the video to Twitter.

Here are 194 reasons why you should vote for Joe Biden