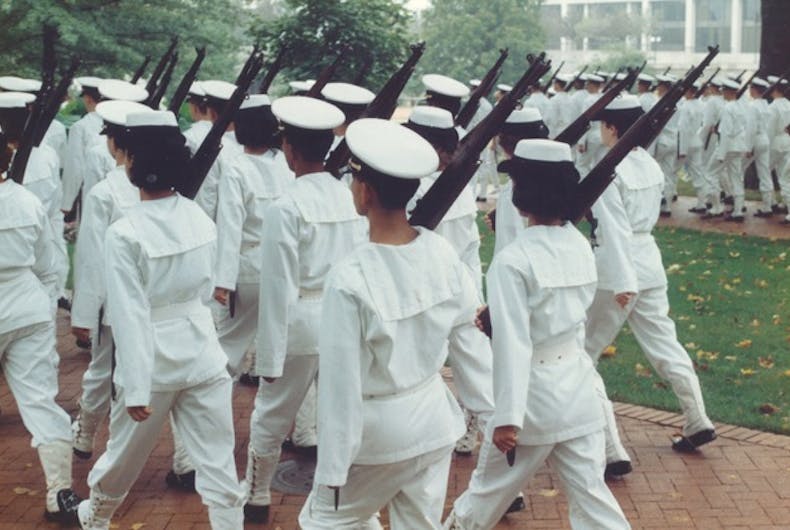 Before graduating from the United States Naval Academy in 1985, Paula Neira had difficulties accepting she was trans.

“I was fighting this internal battle, but asking for help would’ve gotten me kicked out,” Neira said.

Related: Ellen talks with the first gay Navy Spouse of the Year

Steve Clark Hall, a gay graduate from the class of 1975, said he knew gay classmates who were kicked out of the Academy and could not return home to the families who disowned them.

“If you were gay [back then], it was the worst, most despicable, disgusting thing,” Hall said of society’s views at the time.

Up until 2011, it was difficult to be openly LGBTQ at USNA, which has roughly 4,500 students who go on to become military officers after their time in Annapolis.

However, with increasing acceptance of LGBTQ people in mainstream culture, USNA students are experiencing a different environment. The Academy now boasts an LGBTQ alumni association for graduates, a Genders and Sexualities Alliance for current students, and an overall supportive atmosphere.

Joseph Steffan was among the students who had similar experiences to Neira and Hall. Steffan was forced to resign in April 1987 — two months before his graduation — after Academy officials learned he was gay. According to a 1989 story in the Philadelphia Gay News, he said his father did not immediately accept his sexuality.

“It was my father’s dream, my going to the Academy,” Steffan said at the time. “He was very crushed, hysterical with me over the phone. I was afraid he’d have a nervous breakdown.”

Steffan sued the Department of Defense and asked for reinstatement, but he ended up losing the legal battle in 1994. He wrote about his experience of getting kicked out of the Academy in a 1988 New York Times op-ed. In the piece, he noted he was one of the 10 highest-ranking midshipmen at the Academy and had excellent performance and conduct records.

“I was immediately forced to resign, weeks before graduation, and was denied the opportunity to complete my degree and serve in the capacity for which I had been trained at a cost of over $110,000,” Steffan wrote.

Steffan added that this “sanctioned prejudice is unconscionable” and that one’s sexuality does not affect their ability to serve.

“It is obvious to me that the real problem is not homosexuality, but rather, the military’s open and officially supported prejudice against homosexuals who have the desire and capability to serve their country.”

Despite these feelings, Steffan told PGN at the time that he would have returned to the military without hesitation.

Not long after Steffan’s dismissal from the Academy, a new era began for gay servicepeople. On December 21, 1993, then President Bill Clinton issued Defense Directive 1304.26, otherwise known as “Don’t Ask, Don’t Tell.” Through this directive, servicepeople were not required to disclose their sexual orientation and others were not permitted to ask them.

Hall noted how this policy created a set of rules to keep servicepeople safe.

While this was seen as progress at the time, Hall pointed out how part of Clinton’s platform was to allow gays, lesbians, and bisexuals to openly serve in the military. However, the directive “didn’t go far enough.”

“When Clinton promised you could be openly gay, I was planning on being openly gay [while serving],” he said. “But it didn’t happen.”

Shortly before DADT went into effect, LGBTQ alumni of the Academy started to have the courage to come out. This resulted in former midshipmen and cadets founding the Service Academy Gay & Lesbian Alumni (SAGALA) network in 1991. Through 2011, it was the primary social network of the Academy’s LGBTQ alumni, midshipmen, cadets and commissioned officers continuing to serve on active duty.

However, the group was still separate from the United States Naval Academy. This inspired Jeff Petrie and 31 SAGALA members to form USNA Out in 2003.

“The purpose was to reconnect with the Naval Academy, to network with other LGBTQ alumni and to advocate for change in the Navy,” said Neira, one of the group’s founding members.

Hall, another founding member, noted they also formed the group to let the alumni association know the Naval Academy had LGBTQ graduates.

“The number-one reason it existed is to let everybody know, ‘We’re here,’” he said.

USNA Out applied for recognition as an official chapter of the U.S. Naval Academy Alumni Association on Nov. 11, 2003 but their proposed bylaws contained mission objectives that were counter to the association’s mission. The USNA Alumni Association Board of Trustees then unanimously rejected the application three weeks later on the grounds that it was a “special interest chapter” and “not geographically based.”

The group then took the guidance from the rejection and formed the chapter in the Castro of San Francisco to make it “geographically based.”

“The Board of Trustees said that our sexuality was never considered in their decision to reject us,” Petrie told the Washington Post in a November 2004 interview. “Now, we get to put that statement to the test. We just want to support our alma mater openly and honestly.”

The board rejected USNA Out’s application the following month, claiming it was due to the group being part of a special-interest chapter and because many members did not have a primary residence in the Castro.

However, these rejections did not stop USNA Out from making accomplishments in promoting LGBTQ visibility at the Academy. The GLBT Historical Society in San Francisco opened a “Gays in the Military” exhibit, which featured several USNA Out members on display. After noticing the interest in the exhibit, Hall began a project profiling the group’s members called “Faces of USNA Out” in June 2007. The project then became the “OUT of ANNAPOLIS” project, a documentary film about the Naval Academy’s LGBTQ alumni.

“You don’t want to be invisible,” Hall said of his motivation to make the film.

In March 2009, the members attended a national meeting of alumni to discuss the future of USNA Out and as a result, they were incorporated as a 501(c)(3) nonprofit in Maryland later that September.

Finally, a little over a year later, the group was present during a historic moment for LGBTQ individuals in the military. USNA Out founding member Navy Cmdr. Zoe Dunning stood by President Barack Obama’s side when he signed the repeal of “Don’t Ask, Don’t Tell” on December 22, 2010.

While USNA Out was specifically for alumni, its mission still reached students currently attending the United States Naval Academy. Fabian Ortiz, a 2009 graduate, read a newspaper article about Petrie and USNA Out while attending the Academy.

“As soon as I read this article, I just felt like my whole world changed,” Ortiz said. “I felt like I had support. I felt like I wasn’t alone and I understood that there were other gay people out there.”

Ortiz then tracked down Petrie’s contact info and gave him a call. From there, Petrie mentored Ortiz and set him up with other LGBTQ mentors within the Academy. This experience made Ortiz feel lucky to have a strong support system.

However, Ortiz soon recognized his privileges. After losing two friends to suicide, he became more aware of how sadness can impact one’s life. This made him take a closer look at the military and it’s effect on LGBTQ students at the Academy.

“I started noticing throughout life that the military can psychologically hurt people,” Ortiz said. “Now I understand that the numbers are higher for suicide within the military, but being gay and in the military definitely would spike those numbers even higher.”

Other students also started coming out to Ortiz in confidence.

“They were petrified that they were going to be kicked out of the Naval Academy, so then it started hitting me that not everybody is like me,” he said. “I wanted to do something to get everybody to know each other and to offer a stronger support group.”

Ortiz organized a private dinner for a closely guarded guest list of about two dozen gay midshipmen and alumni. He catered the dinner and used his midshipmen loan to book a room at an Annapolis condominium. The dinner quietly became an annual tradition for a small group of people until the repeal of “Don’t Ask, Don’t Tell.” That first dinner after the repeal had nearly 100 guests.

A ‘Spectrum’ of Changes

While these initiatives helped LGBTQ students and alumni outside of the Academy, there still needed to be changes within the Academy’s walls. Those changes began when a small group of students formed Navy Spectrum, the Genders and Sexualities Alliance club for the United States Naval Academy.

“We knew [this club] would be cool for midshipmen to feel comfortable in that environment and also for other midshipmen to learn about the LGBT community and create an atmosphere where people felt safe,” said Kris Moore, one of the club’s founding members.

The 2014 graduate said the club was a great way to interact with others “about your personal life and not have to worry about padding anything here or there.” However, the Academy still needed to make progress with acceptance of trans people. Moore, who is also a trans man but didn’t come out as such until after he graduated, said he received some push back from senior midshipmen about including trans education in the club.

These trans education initiatives continue to be a part of Spectrum’s goals. Current president Lorne Beerman, who will graduate in May, said in an email that before the military’s trans ban, the club hosted a brief with a transgender advocate lawyer, who provided tools to help trans midshipmen stay at the Academy and commission to be a military officer.

Beerman also noted how one club member took a small step recently by including her pronouns in a student-wide email.

“All of us, including faculty and staff, can make a small step in normalizing the discussion about gender identity and expression by including our preferred pronouns in our introductions in conversations and in our email signatures,” he said. “I cannot wait for the Spectrum team and I to host club events that have more productive conversations like these. I believe these efforts will improve general acceptance and create a more welcoming environment for all LGBTQ+ midshipmen.”

Moving forward, Beerman said he would like to increase general knowledge about people who outwardly identify as non-binary or agender. The club currently discusses what it means to be genderfluid and why people use they/them pronouns, but no current members identify in these ways.

“The male/female dichotomy in the military is stronger than at the average liberal arts school because of strict male and female differences in grooming standards, uniforms, physical-test standards, sports teams, room assignments, etc.,” he said.

“There is a feeling of otherness towards people who deviate from the gender binary because there is little exposure of ‘out’ gender non-binary students among the student body.”

However, even though changes still need to be made, it seems like students now have a stronger support system at the United States Naval Academy.

“The most rewarding part is helping members learn more about their own identity and accept themselves, and support them if they make the tough decision to come out to their family,” Beerman said. “Our group’s solidarity helps us feel accepted and supported.”

With just two words, Amy Coney Barrett revealed how biased she is against LGBTQ people