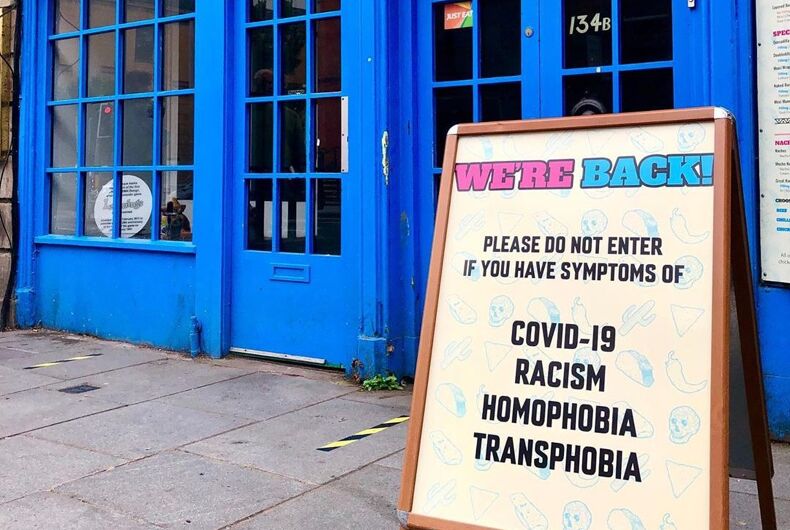 The Scottish restaurant Wee Mexico is drawing attention online after posting a photo of the new sign outside the establishment.

The sign reads “We’re back! Please do not enter if you have symptoms of COVID-19, racism, homophobia, transphobia.”

General manager Ben Wyatt told the Evening-Telegraph that they posted the sign in response to previous harassment of employees and customers.

“We have quite a diverse group of staff and this is something we stand for and we figured our customers would agree with it, and as the sign says if not we are not particularly keen to have them in here,” he said.

“Looking on Twitter it has gone crazy, we were not expecting such a huge response but it is a bit upsetting to see people not taking it as well as others. The majority have had a good reaction to it, it is only the minority that are not.

“2020 has been a crazy year with lots of debate on all sorts of issues and we wanted to spread the message that anyone is welcome here,” he continued. “Businesses shouldn’t get involved in political issues but this is against hate and bigotry towards others.”

“We have had issues here before – a while back some customers complained they were being harassed based on the way they looked and we had to kick the perpetrators out straight away.”

While the subset of “radical feminists” that regularly denigrate transgender women online, now cheered on by Harry Potter author J.K. Rowling, left typical comments denouncing the inclusion of “transphobia” and not “mysogny,” the vast majority were positive.

Tomorrow we’ll be back open for business for the first time in 6 months! We’ve changed a lot of our ordering systems so please read below: Due to the fact we have an extremely narrow building we’re taking extra measures to ensure safe social distancing. Starting tomorrow we will only be able to accept orders made through Deliveroo. This is specifically to prevent the large queues we get at the till. When ordering on Deliveroo you’ll have an option for “Table service”, “Pickup” or delivery. This will mean if you are sitting in you’ll be able place your order from your table and we’ll bring it up to you. If you’re ordering to takeaway you’ll order through deliveroo using “Pickup” and we’ll call your name and pass your order to you in the waiting area. If you have any questions pop them down below in the comments and I’l get back to you 👇 We’ll have extra staff on hand tomorrow to make sure everything goes a smooth as possible. Looking forward to seeing you all! – Ben 🌯