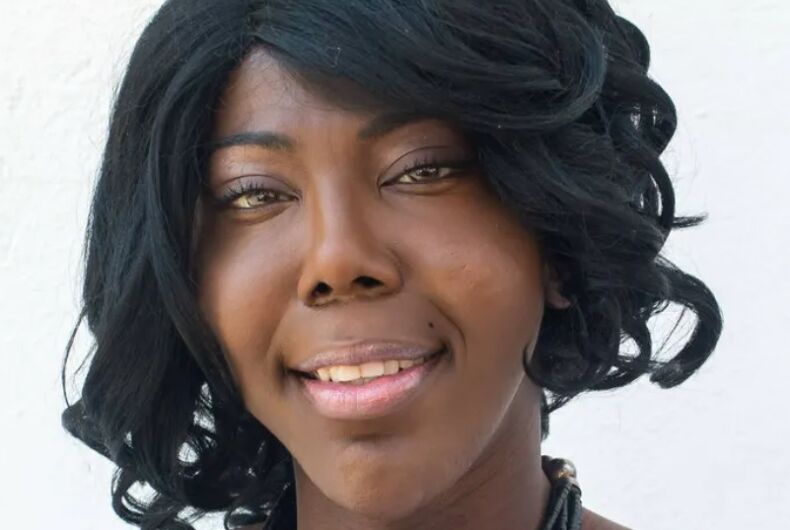 A transgender woman who was brutally beaten in her own home says that the police weren’t helpful, refused to arrest the alleged attackers, and even made jokes about her while she bled on the ground.

Public health student Kendall Stephens was attacked in her Philadelphia home this past August by a crowd who called her a “tra**y” and a “man” and threatened to kill her. Now she’s speaking out about how she was mistreated by police.

In recounting the attack in an interview with HRC, Stephens said that she was studying upstairs in her home while her 12- and 16-year-old goddaughters were downstairs, and one of them noticed a crowd of people outside the house. Stephens went out and tried to get the people to leave, and when they wouldn’t she called 911.

She said that she was on the phone when a woman in the crowd who she didn’t know started yelling at her and then “charged at” her.

“She forced her way into my home, followed by her friends who joined in the assault,” Stephens said. “I ended up in my dining room getting attacked by four women at all sides of me, and then suddenly one of the women picked up a wooden decorative planter and began hitting me about my head and face with it, causing me to become concussed and black out momentarily.”

The woman used slurs while she attacked, and then some men came into Stephens’s house and joined the attack and called her epithets including the n-word, tra**y, and “man.” The men eventually pulled the women away.

“I was finally able to break free from the assault and enter a nearby basement until I was certain they left my house,” she said.

But the horror of that day didn’t stop there. The police showed up but the officers were, according to Stephens, “very unhelpful,” “belligerent,” and “unsympathetic.”

She said she identified one of the attackers, who was her neighbor, but they refused to make an arrest and said that Stephens would have to file a complaint for them to take any action.

Her husband came home and they went to the police department, where she said the humiliation continued as the commanding officer there showed her “the same hostile energy” and “harassed me, trivialized my injuries, and cracked jokes with his subordinates while I bled onto the floor.”

Stephens, who is a community advocate, had a contact at the mayor’s office who showed up to help her, but the police officers still wouldn’t listen. Eventually she and her husband gave up and went to the hospital.

“No one should be in a position to have to advocate on their behalf so fervently when in a state of extreme duress,” she said.

Stephens said she had a nose broken in two places, ribs that were bruised, a head contusion, swelling in her face, a busted lip, and “broken gum vessels that caused two of my teeth to become necrotic.”

She stressed that she is “thankful” that her goddaughters were not attacked.

“Unfortunately, to many, trans lives do not matter,” she said. “We were never safe outside of our homes, but now we are not even safe inside of our own homes, and though that may be impossible to fathom for the typical American, this is our reality.”

“We have been categorically rendered invisible by the whole of society and without legislative protection that is uniform and permanent, the murders, the suicides, the attacks, the oppression, the discrimination, the hurt, pain, suffering and trauma will undoubtedly persist.”