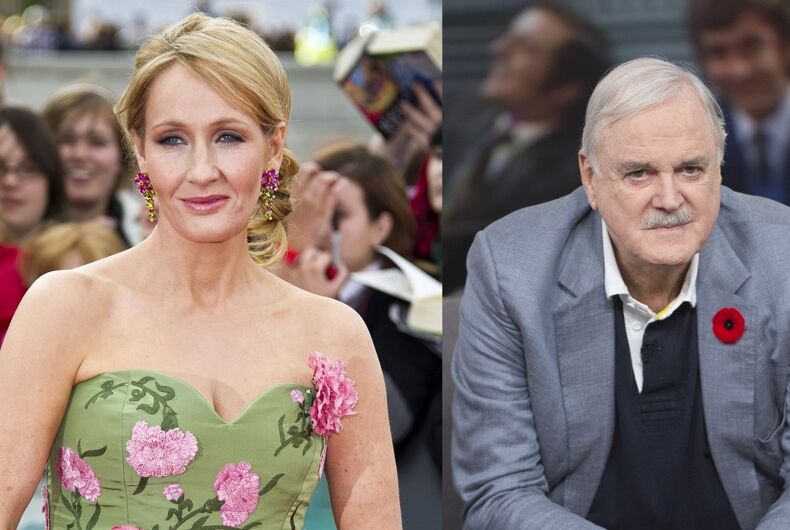 John Cleese, famous for his work on Monty Python as well as for his roles in major films, has come out in support of J.K. Rowling’s appalling views on transgender people.

“Dear Twits, I have added my name to the signatories of the letter in solidarity with JKRowling,” he wrote on Twitter, referring to a letter published in the Sunday Times earlier this week that called the Harry Potter author “an honorable and compassionate person” in the context of her months of attacks on transgender people.

Cleese wrote that he is “proud” to have signed the letter that other major figures in U.K. media have signed, including sitcom writer Graham Linehan who was banned from Twitter earlier this year for hate speech against transgender people.

The letter called criticism of Rowling’s transphobia “an insidious, authoritarian, and misogynistic trend in social media” that was itself a form of “hate speech.”

Dear Twits, I have added my name to the signatories of the letter in solidarity with JKRowling

Cleese has appeared in two Harry Potter films where he played the character of Nearly Headless Nick.

While Rowling has been tweeting about transgender people for months, she faced increased criticism in the past several weeks when her new crime novel Troubled Blood was published. The book is about two detectives who investigate a cisgender man who wears women’s clothes to get close to women and kill them.

A week later, Rowling was promoting an online store that sells transphobic buttons, mugs, and other merchandise to her 14 million Twitter followers.

On Twitter, many of his fans were disappointed that Cleese would come out in support of transphobia. One person asked him if he understood that Rowling has used “her considerable stature to say that trans women aren’t women.”

“I’ve always known that arguing about definitions was pointless,” Cleese responded, and then brought up New Zealand transgender weightlifter Laurel Hubbard, who has had some success in women’s weightlifting competitions.

He called her success “unfair” to cisgender women. Hubbard was on hormone replacement therapy before she was cleared by the International Olympic Committee to compete – her testosterone levels were considered low enough that she did not have a competitive advantage.

It is unclear if he has ever expressed any interest in women’s competitive weightlifting.

I've always known that arguing about definitions was pointless

But when the argument touches on legal matters, it's necessary to become more precise

So I think the case of weight-lifter Laurel Hubbard is an example of great unfairness to women who have never had a man's body https://t.co/Xdtr49bkEW

Cleese, who is white, then called his critics “racists.” It is not clear what racism he was referring to.

No, I'm very happy for you to exist.

Frankly, it's more likely that you are https://t.co/gaVIGrr860

In another tweet, he accused critics of Rowling of achieving “this feeling of purity by using the denial and projection defense, seeing their own hatred in others.”

He was talking about signing a letter that accused people of engaging in “hate speech” because they criticized a celebrity author’s public transphobia.

People who feel themselves specially 'good' often achieve this feeling of purity by using the denial and projection defence, seeing their own hatred in others

I see no hatred whatsoever among the signatories of the JKR letter.

Perhaps it exists elsewhere, among the deranged https://t.co/P70AURARCX

In 2016, Cleese supported Brexit, the non-binding referendum to remove the U.K. from the European Union that was largely motivated by a desire to limit immigration and by concerns that the U.K. did not have enough power in the E.U.

In 2019, he said, “London was not really an English city any more” and implied that that was why the capital was “the UK city that voted most strongly to remain in the EU.”

In a previous interview, he said that London was “cosmopolitan” and “it doesn’t feel English.”

“I love having different cultures around but when the parent culture kind of dissipates you’re left thinking ‘Well, what’s going on?'”

“Londoners know that our diversity is our greatest strength,” London Mayor Sadiq Khan responded at the time. “We are proudly the English capital, a European city and a global hub.”