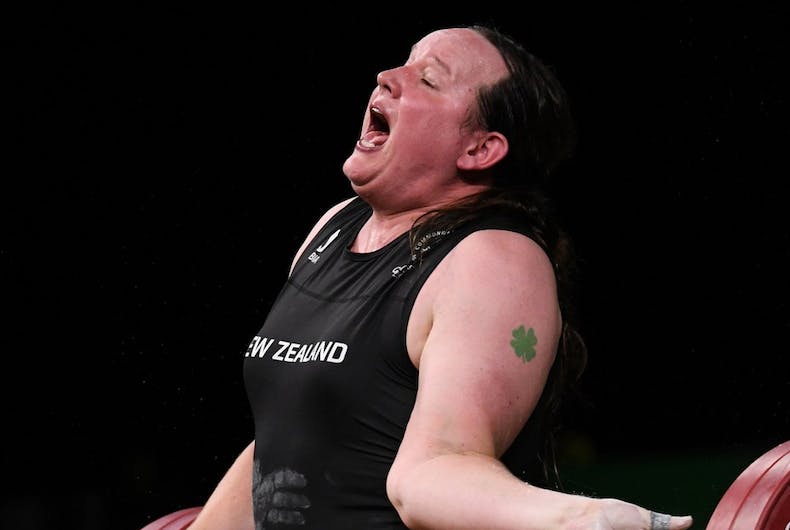 A transgender weightlifter’s competition ended in injury, but her participation is still a victory for equality.

Laurel Hubbard, 40, was the first transgender person to compete at the Commonwealth Games, and had a good chance at winning for women’s 90kg-plus weightlifting.

The weightlifting competition takes place in two parts: the snatch and the clean and jerk.

During the snatch part, Hubbard was set to win with her first 120 kg lift, but tried to break the Commonwealth Games record with a second lift of 132 kg.

That second lift, though, damaged her elbow and prevented her from doing the clean and jerk.

“At this stage we don’t know the exact details of the injury,” she told reporters. “It seems likely that I have ruptured a ligament, some insignificant tissue damage. But until we have further scanning we won’t know the details.”

“The one saving grace in all of this is I’m not in any great pain at the moment. I’m sure that will come with time.”

The Commonwealth Games is a multi-sport event for the Commonwealth of Nations, which is an association of countries mostly made up of former British territories. It takes place every four years and this year’s competition takes place on Australia’s Gold Coast.

Hubbard participated in the games twice before she transitioned in 2014. She underwent a full twelve months of hormone replacement therapy and was cleared by the International Olympic Committee last year to compete as a woman.

That didn’t stop people from complaining about her participation.

“A man is a man and a woman is a woman and I know a lot of changes have gone through, but in the past Laurel Hubbard used to be a male champion weightlifter,” said Michael Keelan, chief executive of the Australian Weightlifting Federation.

“The strength is still there and I think it’s very unfair, and for all females it’s unfair.”

Hubbard has had testosterone levels similar to those of cisgender women’s for over a year. Athletic governing bodies that have developed transgender policies based on medical science consider a period of one to two years of hormone replacement therapy enough for a fair competition – the physical advantage male athletes have is the muscle mass that testosterone allows them to more easily gain.

Hubbard said that her only regret is that she couldn’t show the crowd the best that she could do since they were so welcoming of her.

“Look, it would be untrue to say that the thought never crossed my mind,” she said when asked if she was worried about the crowds not applauding for her because she’s trans. “But there’s no indication at all that they were anything other than absolutely fantastic.”

She was proud to have made history.

“I think you have to be true to yourself and I hope in this case that’s what I’ve done,” Hubbard added.

Laurel you made me cry you may not have won gold but you won the hearts of so many your bravery has humanised the hate against transitioning and transitioned athletes.
Transgender weightlifter Laurel Hubbard’s eligibility under scrutiny https://t.co/A6S88wVjPH