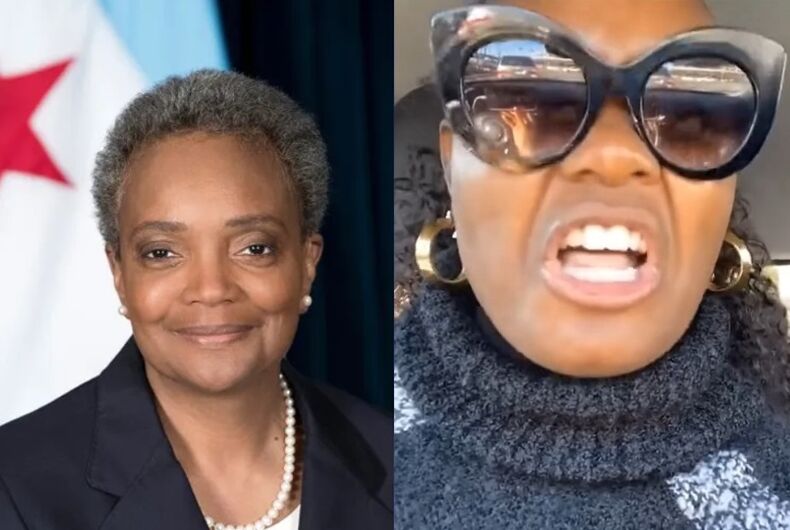 Bevelyn Beatty – who became a darling of the right when she was caught defacing a Black Lives Matter mural in July – went on an ugly tirade where she called Chicago Mayor Lori Lightfoot “nasty” and a “reprobate-minded, disgusting, homosexual demon.”

The conservative activist was arrested in Chicago this past August after she and other protestors failed to disperse while demonstrating outside of Lightfoot’s home. They were protesting the mayor for “pushing to defund the police.”

Beatty, who co-founded At the Well Ministries, posted a video to YouTube just after a court appearance on Monday and she went into a homophobic tirade about Lightfoot.

“You’re nasty,” Beatty said. “You lay in a bed with the same sex, yet you try to make laws of righteousness. You’re vile. You’re disgusting. You’re wicked.”

“The only thing that could revive you was Christ Jesus because you’re ugly from the inside out,” she continued, accusing the mayor of harming “God’s anointed ones.”

“You could never stop God’s anointed from moving, and you’re vile. You’re vile.”

In the video, Beatty explained that she is facing misdemeanor charges for protesting in a residential zone and using amplified sound. She said that she could get time in prison for the charges.

Even before she was arrested for splattering paint on the Black Lives Matter mural, she was being covered on Fox News for saying that she supports Donald Trump in the general election because, she said, Joe Biden will mass arrest and kill Black people.

“If I had to pick between him and Joe Biden, I am not voting in Joe Biden,” she said. “You want to see a bunch of Black people go to jail by the next four years, put Joe Biden in. Watch what happens.”

“You want to see Black men get killed substantially like you’ve never seen before, put Joe Biden in. These Democrats… and I’m not trying to be racist, hate Black people.”