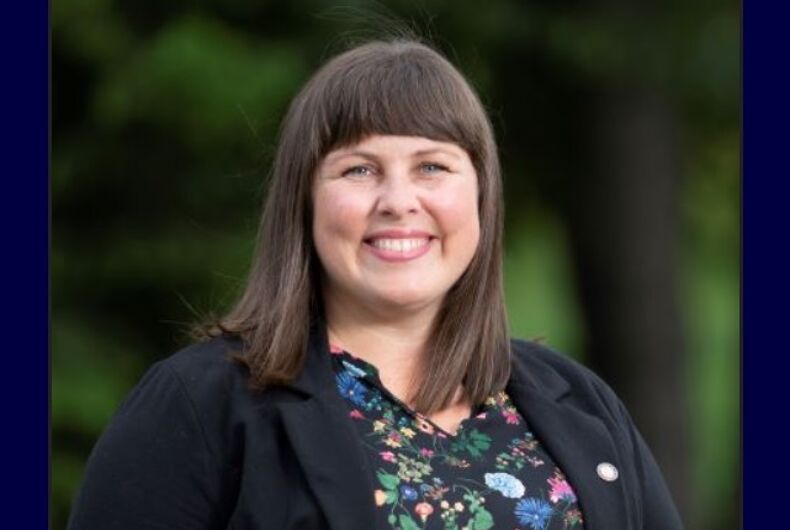 The city of Anchorage, Alaska will have its first woman mayor and its first gay mayor as Austin Quinn-Davidson is set to become the city’s acting mayor after Mayor Ethan Berkowitz (D) announced his resignation amidst sexual harassment allegations.

“At first, I was very resistant, because it is a big task,” she told the Anchorage Daily News. She will officially become acting mayor on Friday after Berkowitz’s resignation takes effect.

Related: A ‘Christian’ homeless shelter in Anchorage is suing for the right to ban trans women

Last week on Tuesday, Berkowitz announced his resignation after he admitted to having a “consensual, inappropriate messaging relationship” with television news anchor Maria Athens.

“I apologize to the people of Anchorage for a major lapse in judgment I made several years ago,” he said in a statement. “I’m embarrassed and ashamed for the hurt I’ve caused my family and our community. I take responsibility for my actions.”

Athens also accused Berkowitz of posting pictures of his genitalia to the internet.

Quinn-Davidson, who is originally from California, is an accomplished attorney and has served on the Anchorage Assembly since 2018. She is on the Assembly’s Community and Economic Development Committee and co-chairs the Health Policy Committee.

The city’s charter requires the chair of the Anchorage Assembly to step up and fill in for the mayor until either a special election can be held or the next regular election is held. Since the Assembly’s chair – Felix Rivera – did not want to become acting mayor, the Assembly voted to reorganize itself this past Friday and made Quinn-Davidson the chair and Rivera the vice chair. When Berkowitz’s resignation takes effect next Friday, Quinn-Davidson will become acting mayor and Rivera will effectively retain his role as chair.

“I know vice chair Quinn-Davidson to be a person who is compassionate, a dedicated public servant, a superb listener, a critical thinker, and most importantly, in my opinion, level-headed and even-keeled,” Rivera said.

Several members of the Assembly stressed the need for leadership during the pandemic as cases of COVID-19 increase in Anchorage while the economy has been hurt. The city, according to the Anchorage Daily News, has been divided in its desired approach to managing the pandemic and Berkowitz has been a target of people’s ire.

So Quinn-Davidson has her work cut out for her.

“I think the most important role of a mayor right now is to inspire trust in government, and to make people feel at ease during a time that is pretty tumultuous,” she said. “I think revitalizing the economy and ensuring that small businesses can survive and that people can get back to work is key.”

Quinn-Davidson lives with her wife Stephanie, their two dogs, and one cat.