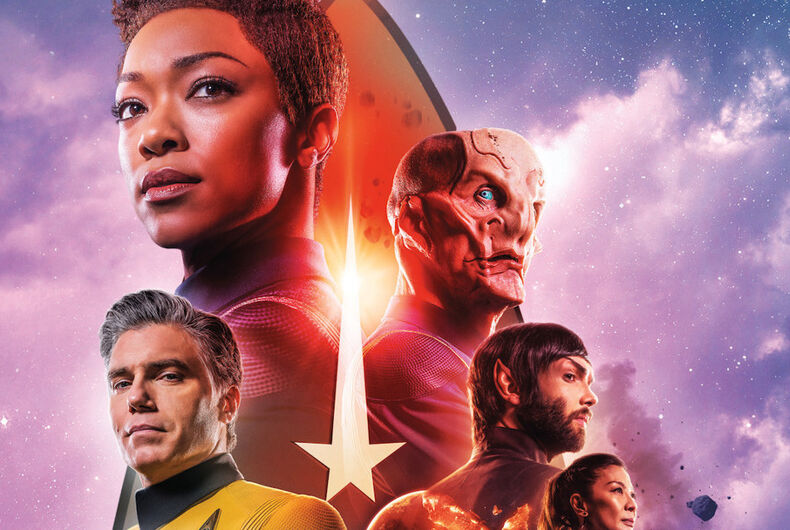 Star Trek is going where the 54-year-old sci-fi TV franchise has never gone before by introducing its first-ever transgender and non-binary characters. The characters will be played by actors who are trans and non-binary in real life.

In its upcoming season of Star Trek: Discovery, the series’ 2018 CBS spin-off, trans actor Ian Alexander will play Gray, a Trill, which are aliens who serve as hosts for symbiotic creatures that provides unique personality traits and skills.

Non-binary actor Blu del Barrio will make their debut by playing the non-binary character Adira, an intelligent and introverted teenage amnesiac whose coming-out story will mirror del Barrio’s own real-life coming out.  They will befriend Discovery’s gay couple, Lt. Commander Paul Stamets and Dr. Hugh Culber, who are played by Anthony Rapp and Wilson Cruz.

Del Barrio, who was a student at the London Academy of Music and Dramatic Art when they auditioned for Star Trek, said that they didn’t come out to their own family until after they were cast in the show.

The two actors will appear in season three of Star Trek: Discovery, which will be released on CBS All Access, the TV network’s streaming service, on October 15.

Del Barrio told GLAAD, “I honestly cannot speak highly enough of Ian. I absolutely love him, and it was so fun working alongside him. Having him join the show with me was a godsend.”

“It’s pretty overwhelming joining a show with such a well-known cast going into its third season,” del Barrio continued. “So I was so thankful to have his support whenever I was freaking out. He’s a talented, hardworking actor, and an all-around magnificent human being, so it was a joy having him as a partner.”

This is the second large step towards LGBTQ representation that the show has taken in the last few years. The premiere of Star Trek: Discovery included a very prominent male same-sex couple with Stamets and Culber. The two characters kissed near the end of season one.

The kiss was actually the series’ second same-sex smooch. The first and only other such kiss occurred in Star Trek: Deep Space 9, Season 4, Episode 6 (“Rejoined”) on October 30, 1995, between two female characters: Lieutenant Commander Jadzia Dax and scientist Lenara Kahn, both members of the Trill society.