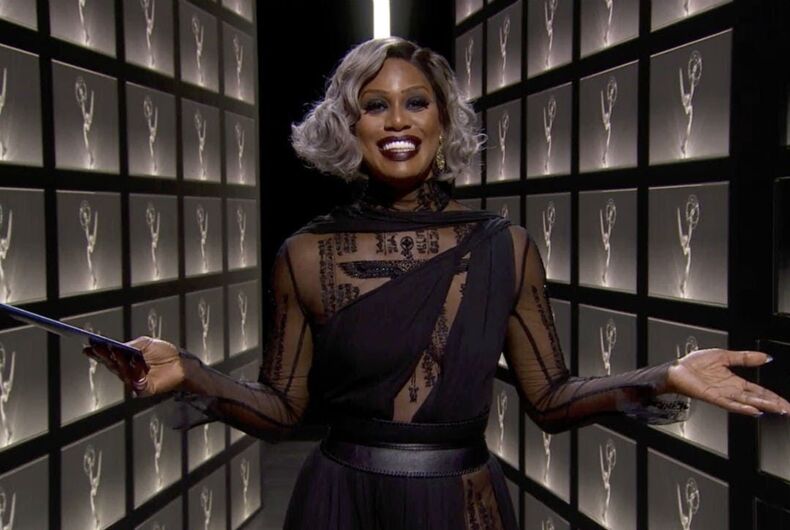 Laverne Cox has been nominated for an Emmy four times for her role as Sophia Burset on Orange Is The New Black. She’s lost each time, including last night’s nom for Outstanding Guest Actress in a Drama Series.

So when it was time for Cox to introduce the nominees for Writing in a Drama Series, the transgender actress was feeling a little salty – and it showed. But was Cox’s short monologue so feisty that it needed to be censored by ABC?

Related: Here’s where you’ll find the most gay & lesbian couples in America

“I am living proof of the American dream that anyone in this country can lose the Emmy four years in the same category and yet somehow end up on this stage presenting an award to someone who probably didn’t…” Cox said, before her audio was briefly cut off.

“And now here are the nominees for Writing in a Drama Series.”

After fans were left confused what could have caused the speech to be censored, the American Television Academy released the full monologue on YouTube.

The missing phrase that caused the panicked reaction didn’t even include a curse word: “presenting an award to someone who probably didn’t effing vote for me.”

Neither ABC nor the Academy have given an explanation why Cox’s speech was censored. While some thought her speech was funny, her worst crime, according to fans online, was coming across as a sore loser.

#emmys This was so odd 😂😂. Gave off Joan Crawford vibes. Laverne killed this dress though 🔥 #Emmy #Emmys2020 #EmmyAwards #lavernecox pic.twitter.com/bim0vlP6fR