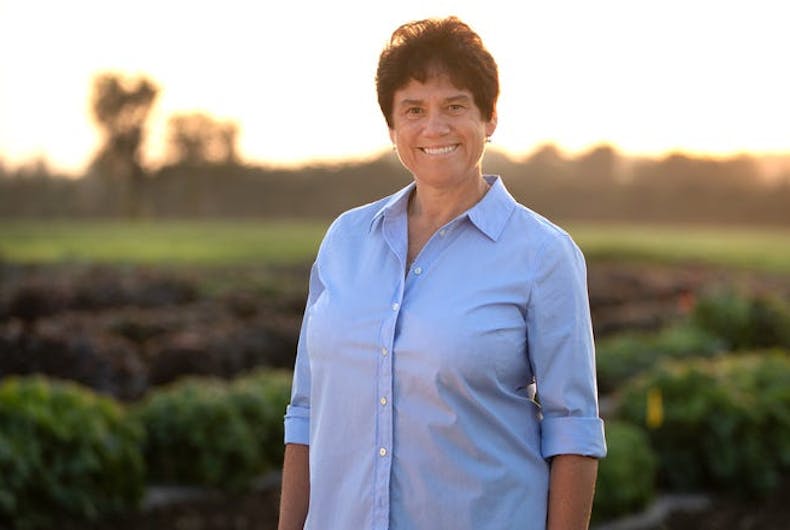 “We’re at an inflection point,” Mitrano told LGBTQ Nation. “We can’t take democracy for granted. Everyone has to pitch in.”

Related: Fabian Nelson could be the LGBTQ lawmaker Mississippi needs

Mitrano credited the LGBTQ movement with her ability to run for Congress today.

“I was very involved politically when I was college,” she said, “but I was dating men and women then, and I thought, that’s just the death knell.”

“Some really important things have changed, and I’m grateful to all of the efforts, large and small, organizational and individual that have created an environment where I can run and for all intents and purposes, it is not an issue.”

Mitrano spent most of her career in higher education but felt compelled to run for Congress in part due to her background in cybersecurity, knowledge she feels is crucial at a time when hacking poses such an extreme threat.

She spent 12 years as the Director of Information Technology Policy at Cornell University, and in 2016 she created a cybersecurity certificate program for the University of Massachusetts Amherst.

“After Trump was elected, and he ignored the Russian interference and in fact politicized it, it was kind of the straw that broke the camel’s back,” she explained.

“The U.S. is the target of not just one, two, or three, but many many nations that for one reason or another want to interfere with us…. There’s a lot left undone in the areas of government surveillance domestically and consumer rights.”

Mitrano said there is a dire lack of understanding of global cybersecurity in Congress, and that many laws must be reformed to keep the U.S. safe from both domestic and international attacks.

“I think it’s a good idea to have someone who comes from an educator background talking about these issues,” she added.

“Because if you just get someone from technology who isn’t skilled in communicating to people who don’t share the same set of acronyms…it’s falling on deaf ears. We need to educate people… What really is driving the global economy is information… We need people who don’t get glassy eyed every time an executive from Google or Facebook shows up before Congress, unable to even know what questions to have.”

Unseating Rep. Reed, who in January was named Honorary Chair of Donald Trump’s reelection campaign, is also a major driver for Mitrano. He has held his position since 2013 and is someone Mitrano described as a “Tea Party to Trump sycophant” and who has grossly neglected the district.

“He voted against healthcare affordability every single time he’s been sitting there in Congress,” she said. “It’s over seventy times he voted against rules that would prohibit discrimination based on preexisting conditions, for example. He voted against negotiations for lower prescription drug prices for the elderly and the poor, and he comes from the background of a medical debt collection company, so there is a very clear conflict of interest.”

Education is another area where Mitrano says Reed has been irresponsible.

“He gets a lot of money from the banking industry, and it’s no wonder then that he hasn’t stood up and said, ‘wait a minute’, why on our government grants and then also private grants for education are we charging usurious interest rates of eight, nine, 10, 11, or 12%? It’s wrong.”

“If you want to keep a generation of people down, either make sure they think higher education is too expensive or charge them 12% interest on those loans.”

Mitrano is also focused on increasing Internet in her district, a problem she said is shockingly large. She estimates that more than half of the people in her district do not have a reliable internet connection, which she believes is unacceptable.

“You cannot function. You cannot raise children. The stories of parents taking their kids to Burger King at 10 p.m. and sitting out in the parking lot with their car idling so that a middle schooler can do his homework, I hear it too many times.”

“It’s not an isolated case. That is not how you prepare young people for the competitive global economy. You’re wasting people’s time and talents and abilities. You’re holding people back.”

Reed has refused to debate with Mitrano, which has fired her up even more.

“I have never heard of that in a democracy,” she said, “that an incumbent would not want to debate. I pray and hope I get elected, and I pray and hope I couldn’t get onto a stage fast enough to let the people in my district know what I’ve done for them.”

Above all else, Mitrano wants voters to know how devoted she is to what they need.

“I left my job in order to fund-raise, and so I left work that pays more than Congress pays in order to do this. So it’s really a campaign of dedication and devotion to some basic American principles of Democracy, equality, and justice.”