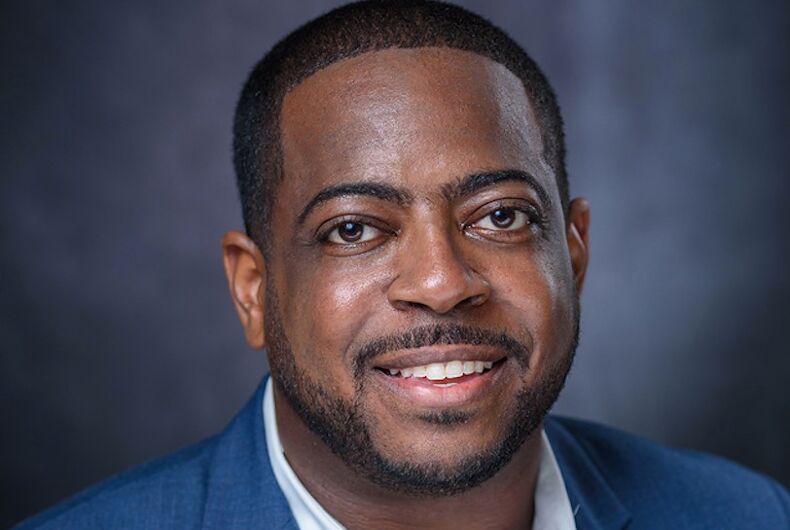 In a special election on September 22, gay Mississippi House candidate Fabian Nelson could become the first out LGBTQ person elected to state office in Mississippi.

In a state that has a reputation for being one of the worst for LGBTQ people, a victory for Nelson would be a big deal.

Related: Stephanie Byers could be the first out trans person in the Kansas legislature

Due to a bill that the Human Rights Campaign once called “The Nation’s Worst Anti-LGBTQ State Law” in 2017, it is still legal to discriminate against LGBTQ people on the grounds of religious beliefs in Mississippi. It is a state where devastatingly large percentages of LGBTQ students report being harassed at school, and a state where Nelson says LGBTQ people are often told they have no future.

“A lot of us are verbally attacked,” he told LGBTQ Nation. “We have low self-esteem, low confidence. You’re not going to be anything, is what you’re always told.”

“So being a role model to LGBTQ youth would mean so much to me, to say, hey it can be done. Honestly, just the fact that I am able to run for state legislature means a lot to me, and I think that’s going to encourage others to come be part of the change we’re wanting.”

Nelson is running in District 66, which encompasses parts of South Jackson, along with surrounding rural areas. When the district’s representative Jarvis Dortch stepped down in July, Nelson, a small business owner who hadn’t previously imagined a career in politics, knew he had to run.

“I found myself always being the one on the sidelines saying things need to be changing, things need to happen,” he said. “Then all of a sudden this seat for state house became open… and when I saw that, I said, it’s time for me to be the change that I talk about all the time.”

With the pandemic, he said, many people are realizing now just how crucial it is to have health insurance.

“We have a very high rate of COVID right now,” he added, “and we’re having high death numbers. And the reason that’s happening is because people don’t have health insurance, and they have a lot of preexisting conditions they have not been getting treated for. With COVID if you have preexisting conditions, it just wreaks havoc on your body.”

When it comes to education, he said that while the state’s system has improved over the last few years, there is still a long way to go.

“I’ve been talking to a lot of my voters, and they’ve been telling me their children don’t even have textbooks… In Jackson, we’re the heart of the state. We’re the capital city. So if we cannot get it right in the capital, just imagine what it’s like in the rural parts of our state.”

Nelson believes he can be a strong voice in the house because he has experienced many of the challenges his constituents are dealing with. He grew up in Yazoo City, Mississippi which he said has been ranked the worst place to live in the country.

“I don’t agree with that of course,” he said. “I love my hometown, but being there, I was able to see firsthand how we were lacking healthcare… Going to public schools in a poor area, I saw how hard it was to get a quality education.”

He also added that he knows what it’s like to be discriminated against for being gay.

“This [religious freedom] legislation, it’s garbage,” he said, “and it’s something that is holding our state back in the dark ages.”

Nelson believes getting rid of the harmful legislation would not only be the right thing to do on a moral level, but would also be better for the state’s economy.

“I feel that getting this LGBTQ freedom of religion bill repealed, that’s going to open up our doors. Because companies don’t want to come here and bring their highly talented, trained people to the dark ages.”

Nelson wants voters to know that above all else, he cares deeply for his community.

The Southern Baptist Convention may change its name, but it can’t repeal a history of oppression