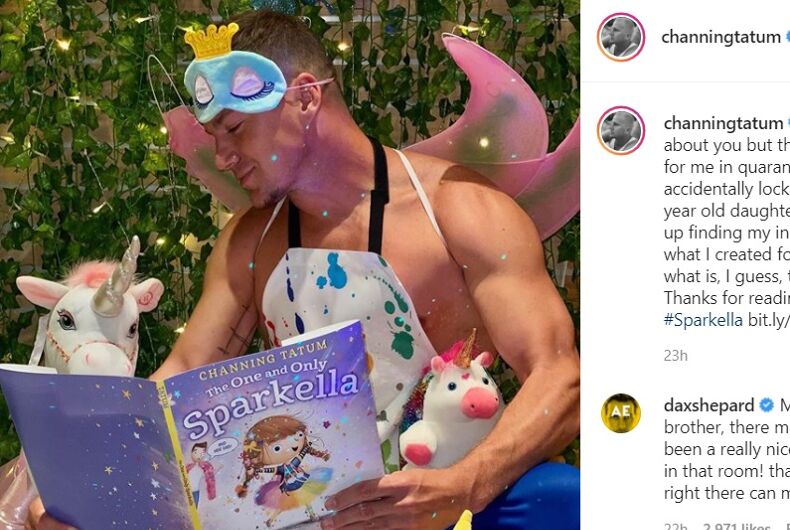 Channing Tatum, known for starring in the Magic Mike and 21 Jump Street films, told his millions of Instagram followers that “things got a little weird for me in quarantine.”

The entertainer, who turned 40 this year, is coming out with a new picture book called The One and Only Sparkella. Tatum says that the book came from “accidentally” locking himself in his six-year-old daughter Everly’s room.

“This is what I created for my little girl,” Tatum wrote in a social media caption, “from what is, I guess, the little girl in me.” The caption accompanied a picture of Tatum apparently dressed as a fairy, reading his book to stuffed unicorns.

Guys, I don’t know about you but things got a little weird for me in quarantine. I ended up accidentally locking myself in my 7 year old daughter’s room. And I ended up finding my inner child. So this is what I created for my little girl. From what is, I guess, the little girl in me. Thanks for reading. #Sparkella bit.ly/OneAndOnlySparkella

“This is the kind of quarantine I want to be in,” said YouTuber Amymarie Gaertner.

“There must have also been a really nice set of weights in that room!” actor and director Dax Shepard commented.

In previewing the children’s book with People Magazine, The One and Only Sparkella will be about a young girl named Ella, who is made fun of for her glittery appearance. Ella feels bad, but then her father encourages her to keep being herself and builds her self-esteem. The book, being published by the imprint Feiwel & Friends, is slated for release on May 4, 2021.

Tatum shared the dedication of the book, which reads in part “This is also for all Dads that might have a little girl… Wear whatever, dance however, and be as magical as you can. Because I promise they will return the love.”

Outside of writing the book, Tatum is believed to be working on the development of his next film, DOG, which will be his directorial debut. Reports indicate that he is currently in an on-and-off relationship with singer-songwriter Jessie J, who has previously dated both men and women.

The One and Only Sparkella, illustrated by Kim Barnes, is available for pre-order from Macmillan Books.

Principal expels gay student because “Jesus would want me to”

Two men found with a completely drug-resistant form of HIV. Doctors are worried.