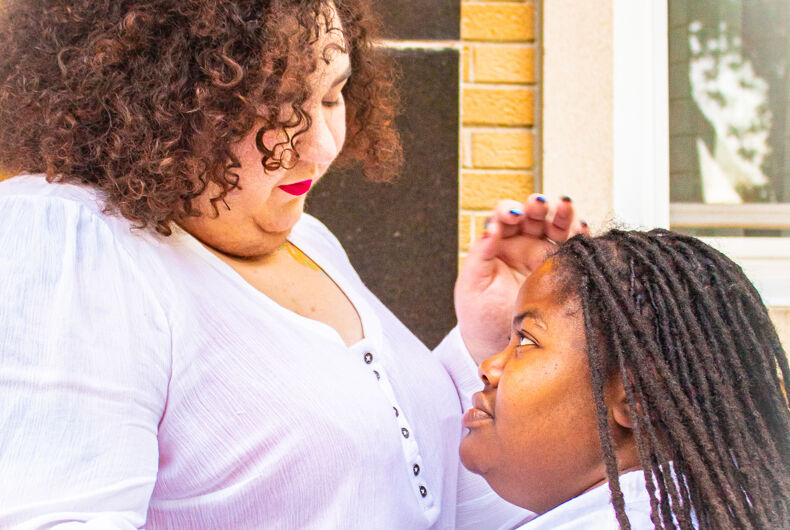 Chaya Milchtein refers to herself and her fiancée Jodyann Morgan as “complete opposites.” But despite that, the two are getting married this Saturday, and you’re invited.

“We are two people from two different worlds… as far opposites as you could possibly imagine,” Milchtein told LGBTQ Nation.

Related: An ICU nurse was separated from her girlfriend for months. The neighbors made their reunion magical.

Milchtein is white, Morgan is Black. Milchtein was raised in a strict Hasidic Jewish home with 14 brothers and sisters where she was forced to wear long dresses and forbidden from watching TV. Morgan was raised in a smaller Pentecostal family from Jamaica where she watched TV like a typical teenager and became a fan of live music.

Milchtein is outgoing, public, and big on Instagram, Morgan is introverted, quiet and doesn’t often like being photographed.

Milchtein wanted their wedding to be a big queer party and Morgan wanted it to be a small intimate event. But now, because of the ongoing COVID-19 epidemic and video conferencing, both Milchtein and Morgan are getting their wish.

The two are getting married on Facebook Live on Saturday, August 29 at 1 p.m. Eastern in what they’re calling the “biggest, queerest wedding of the year.” Milchtein is inviting literally everyone to virtually attend through web-video, but in-person only the couple, the officiant and the videographer will be attending — there will be absolutely no guests so the couple can reduce the possibility of coronavirus infection.

“I wanted a wedding, that was either a big queer party… because that was important to me,” Milchtein says, “and to be able to do something that wasn’t always possible: to be able to publicly demonstrate my love and publicly announce that this is what our life is.”

The couple met four years ago while Milchtein was having her nails done in Brooklyn, the part of New York City where she and Morgan both lived at the time. Morgan worked security at the indoor Barclays Center arena and came into the salon offering a free ticket to watch the Ringling Bros. Barnum & Baily Circus. Milchtein had never been to the circus before, so she ended up accepting, and the two eventually started dating — that was four and a half years ago.

Now, the couple has been engaged for just over a year. They live in Milwaukee, Wisconsin with their cat Stripes Dalek and their tortoise Polka Dot Tardis. (Their pets’ names are half descriptions of the clothes Milchtein was wearing when they got them and half named from parts of Morgan’s favorite sci-fi program Dr. Who).

The two decided to marry in Indianapolis, Indiana—“the Vegas of the Midwest” which has a well-established elopement and “micro-wedding” industry where folks can quickly get a same-day marriage license with no witnesses or big fuss. They planned their entire wedding in just four-and-a-half weeks.

Milchtein told LGBTQ Nation that they chose to get married now because COVID-19 has made the future of the world uncertain and put them in a position where they might need the legal right to make medical decisions in a hospital for one another even though they’re both young and healthy.

Nearby Indianapolis also provides a place where they can both travel without boarding a plane. The couple has planned an outdoor wedding: They got tested for coronavirus last Thursday and everyone else involved will be wearing face masks. But despite the epidemic precautions, they’re hoping the ceremony brings lots of people joy.

“The world is a really shitty place right now,” Milchtein says, “And if somehow sharing in our joy is going to give people a momentary reprieve from their struggles and from COVID and from everything else that’s happening, that would be a blessing for us. If we start off our marriage building community, then hopefully that’s how we’ll continue to do it for years to come.”

The couple also hopes that seeing two queer, interfaith, interracial, and plus-sized women will inspire others to realize that love and marriage can look a lot different than what people usually see in the media. Even their vows will leave out all the usual mentions of complete monogamy and physically belonging to one another because their relationship is based on mutual respect rather than bodily ownership.