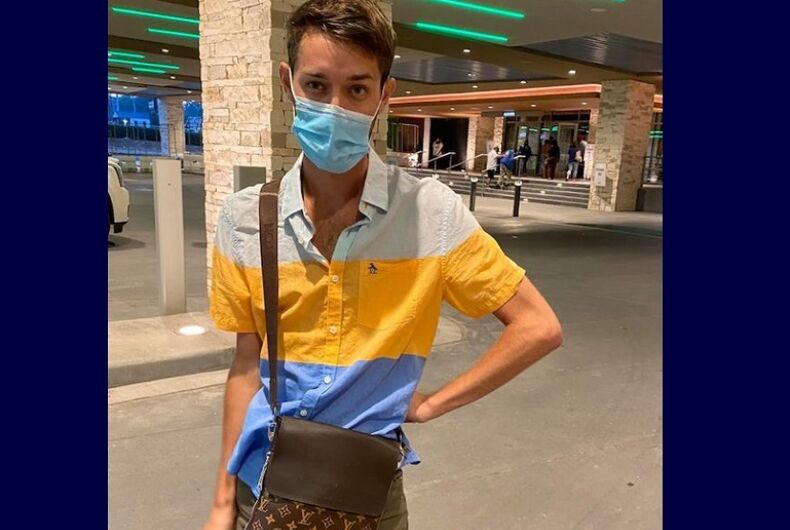 A gay man says he faced anti-gay discrimination and rigid gender stereotypes when he went to a casino in Hot Springs, Arkansas with his Louis Vuitton purse.

Related: This fierce lesbian got revenge on her childhood tormentor by stealing her purse

Jordan Kirk tried to walk purse first into the Oaklawn Casino with his husband on Friday, August 7, but the guard told him to leave his purse in his car.

Kirk says he saw women going into the casino with purses and asked why he was being told to leave his.

“I was like well she is taking her purse inside and the lady behind us was like ‘Do I need to take my bag to the car?’ and he was like ‘No, purses are allowed,'” Kirk recounted.

The guard’s supervisor came over and said that the casino’s policy is to ban all bags… but purses are allowed. And the difference appears to be the gender of the person holding it.

“I asked him if a woman was carrying my bag could she take it in the door and he told me yes – but because I wasn’t, I couldn’t take it inside,” said Kirk.

He pointed out that some of the purses women were carrying were bigger than his, and one woman carrying a purse stood up for him and called the policy “discriminating.”

Kirk said that a manager eventually let him in with his purse, but he had to hand it over so that it could be searched for explosives. No one else’s purse was searched.

“They were worried that a man carrying a ‘bag’ may have explosives,” he wrote. “EXPLOSIVES? You’re kidding me? Because I’m gay, I’m carrying a man purse; now I may carry explosives?”

“Who is going to blow up their Louis Vuitton on purpose?”

“On behalf of Oaklawn, I’d like to apologize for the incident and the (in)convenience last night. The situation has been addressed with our team members. Thank you,” she wrote.

Oaklawn released a statement that said they have “appropriately addressed Mr. Kirk’s incident with the team members who were involved along with their supervisors.” The statement did not discuss specific steps being taken or any policy changes made.

“Anyone and everyone over the age of 21 are welcome at Oaklawn Racing Casino Resort as long as they adhere to our security requests and guidelines, as well as our COVID-19 precautions and have a valid ID. Safety is and always has been one of our top priorities at Oaklawn – for both our guests and our team members.”