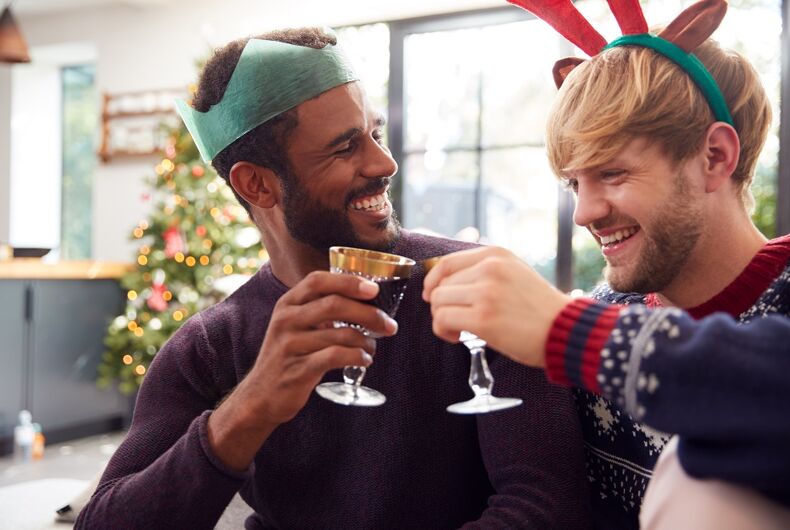 While LGBTQ people are still waiting for Hallmark to make one of its dozens of holiday films queer, Lifetime has beaten them to it.

Lifetime – the other channel known for its made-for-TV holiday romance movies – just announced The Christmas Set-Up, a gay romantic film for the holidays.

Related: Dear Lifetime & Hallmark Channel, we have a holiday wish. You can make it come true.

According to the entertainment website The Mary Sue, the movie is about a gay, New York City lawyer named Hugo who goes back to his hometown of Milwaukee with his best friend Madelyn for Christmas.

His mother is “ever the matchmaker” and gets Hugo to run into his high school crush Patrick, who is home for the holidays too from his tech job in Silicon Valley.

“As they enjoy the local holiday festivities together, Hugo and Patrick’s attraction to each other is undeniable and it looks as though Kate’s well-intentioned Santa-style matchmaking is a success,” the promotional material says. “But as Hugo receives word of a big promotion requiring a move to London, he must decide what is most important to him.”

Just give these people the Oscar already!

Suzie, a rising young architect, returns to her small hometown in Maine for Christmas where, her Chinese American family runs the local Lobster Bar. Following the loss of her beloved grandmother who was a legendary baker in their community, Suzie is guilted into following in her grandmother’s footsteps by entering the local gingerbread house competition.  Teaming up with an old high school friend Billy, who grew up to be a catch, Suzie must find the right recipes and mix of sugar and spice to win the competition and perhaps find some love in the process.

“We are thrilled to continue our legacy of creating a holiday destination that is welcoming to all at Lifetime,” said the channel’s head of programming Amy Winter in a statement. The network announced that they’ll have 30 films in their holiday line-up.

Lifetime was ahead of the curve last year as well, when its holiday romance Twinkle All The Way showed a kiss between two men, although they weren’t main characters.