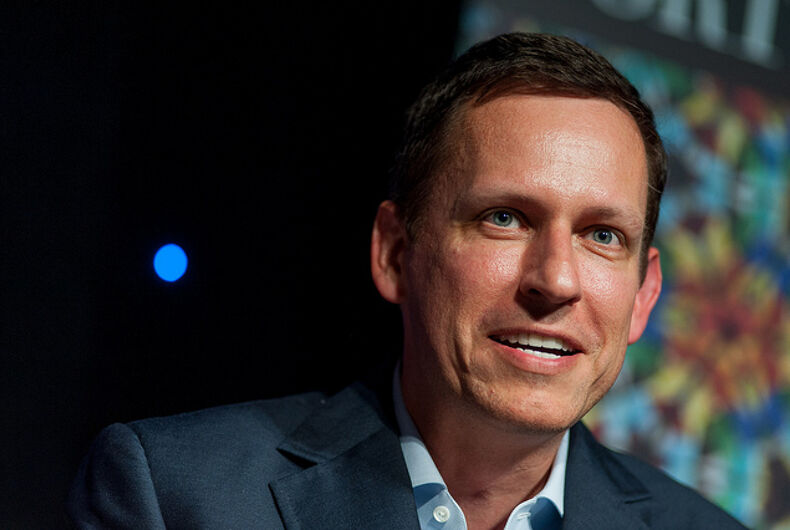 Peter Thiel, the gay tech billionaire and Republican activist who spoke at the 2016 GOP convention, threw his money behind an anti-LGBTQ candidate who may actually win today’s primary for the U.S. Senate seat in Kansas.

Thiel gave almost one million dollars to the campaign of former Kansas Secretary of State Kris Kobach for the GOP primary for U.S. Senate. And now state Republicans are reportedly rushing to help Rep. Roger Marshall (R-KS) win the primary because they’re worried Kobach’s extremism could lose the Senate seat for the party.

Related: Kansas is getting LGBTQ protections because elections have consequences

Kobach ran for governor in 2018 and lost to a Democrat, partly because several prominent Republicans in the state defected and supported his Democratic opponent, current Gov. Laura Kelly, because of his outlandish and offensive views.

He then announced that he was running for the U.S. Senate seat left vacant by Sen. Pat Roberts (R), who is retiring.

Kobach’s views on immigration and LGBTQ issues are extreme. He has said that same-sex parents are “certainly not good for the kids.” He has also compared marriage equality to drug addiction.

Kobach made a name for himself on immigration. He has said that immigration to the U.S. is part of a larger “strategy of… replacing American voters with illegal aliens,” saying that immigration puts white people in the U.S. at risk of “ethnic cleansing.”

Donald Trump is a fan of Kobach, saying last year that he was considering creating a role of “immigration czar” in the administration and that Kobach was one of the people being considered for it.

And Thiel is a fan as well. He has given $850,000 to a super PAC that’s backing Kobach’s campaign and helped Kobach find other wealthy backers.

University of Kansas political scientist Patrick Miller told Vox last week that Thiel has been “absolutely critical to Kobach being a viable candidate,” calling Thiel’s money “the lifeblood of the pro-Kobach campaign at this moment.”

The website speculates that Thiel sees an ally in Kobach in the Senate, which Thiel will need if Trump loses reelection this fall. Thiel is a founder of the tech company Palantir that helped design software recently for the U.S. Immigration and Customs Enforcement.

Thiel himself has not publicly commented on the election.

But the state’s Republican establishment is doing what it can to stop Kobach from winning the primary, backing his opponent Rep. Marshall out of fear that Kobach can’t win the general election.

“Things have tightened considerably,” an unnamed Kansas Republican operative told The Hill. “I think everybody working for Marshall felt pretty good for a while, but he’s not as comfortable as he was a week ago.”

“Democrats haven’t won a Senate race here since when? The ’30s?” said another Republican strategist. “Kobach is pretty much the only one who could ruin that.”

Marshall has gotten endorsements from major Republicans and the United States Chamber of Commerce – a pro-business lobbying group – has dropped $400,000 for ads on Marshall’s behalf.

“She’s outraising the entire Republican field combined, and she’s well-positioned to take on whoever emerges from this very nasty and expensive primary,” said a spokesperson for the Democratic Senatorial Campaign Committee.

Portia comes out swinging for Ellen amidst sexual harassment accusations