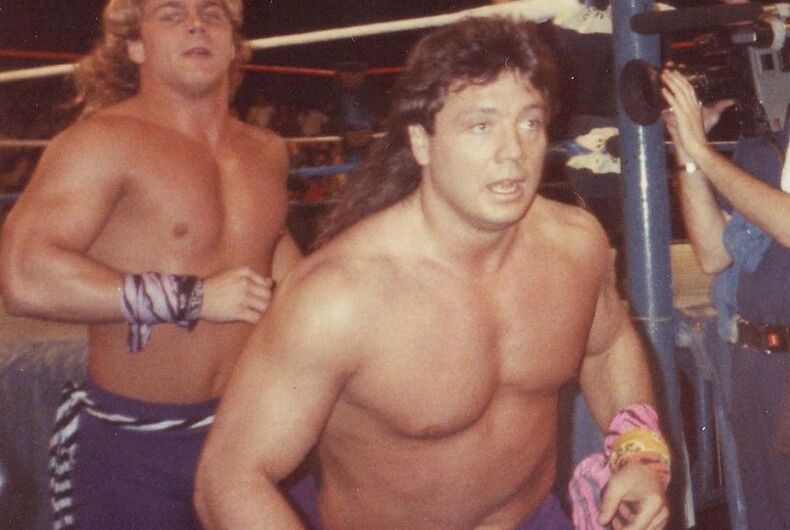 Marty Jannetty in his debut with the Rockers in 1988.Photo: John McKeon via Wikipedia

Marty Jannetty, a former WWE star with 20 championships under his belt, has confessed to murdering a gay man and disposing of the body in a river.

In a post to Facebook, Jannetty, 60, wrote that he bought marijuana from a gay man at a bowling alley who he then killed.

Related: Why are WWE wrestlers bashing gays instead of each other?

He wrote that the “fag… put his hands on me..he dragged me around to the back of the building.” He claims he was 13 at the time.

“You already know what he was gonna try to do,” Jannetty wrote, probably referring to sexual assault.

Jannetty said that authorities should have looked for the gay man’s body in the Chattahoochee River, which runs near his hometown of Columbus, Georgia.

“Winnie,” he wrote, referring to his lover, “I likes you so damn much, probably my favorite..but I promised myself way back then, nobody would ever hurt me again.”

He said that Winnie hurt him with her “fuckin Jamaican jealousy” and told her to “go your own way.”

In a comment, Jennetty said that the murder was “a billion years ago, plus I have the satisfaction of knowing that BITCH ass n*nja never got to do another kid like that.”

@WONF4W @PWTorch #prowrestling did Marty Jannetty just talk about killing someone, on FB? Is this a "known story" in wrestling? #prowrestling #wwe pic.twitter.com/lVS57idhYS

If Jannetty’s story is correct, the murder was actually about 47 years ago. Georgia has no statute of limitations for murder.

In a statement, the Columbus Police Department said, “We are going to look into this.”

“The first step will be seeing if we have any missing persons or unidentified remains cases that match the limited information in the post,” a spokesperson for the cold case division told TMZ.

In 2016, Jannetty joined a class action lawsuit against the WWE, alleging that the wrestling league concealed information about the risk of brain injuries from wrestlers, resulting in permanent damage.