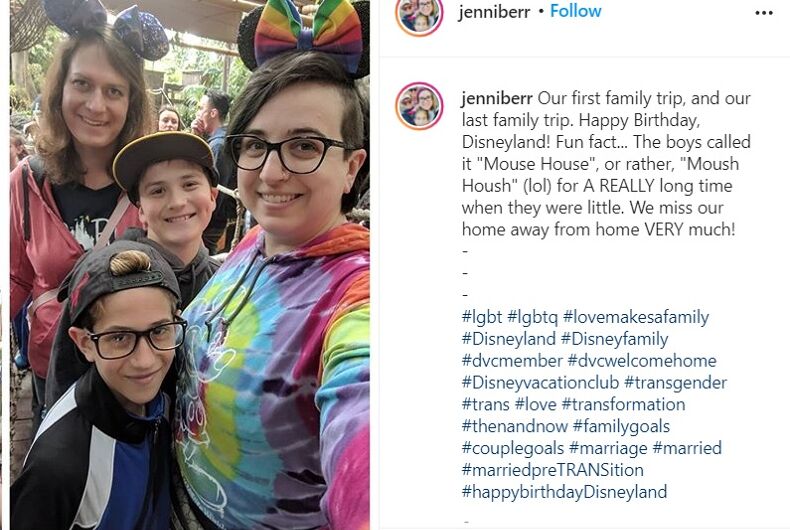 Fifteen years ago, when Jenni Barrett married her wife, Sarah, both women were in the closet. Years later, they both came out to each other at the same time and they’re sharing their story to show how queer families can stay together even through great personal change.

Today, Jenni is a cisgender lesbian and Sarah is a gay transgender woman, but when they met a party in college Jenni identified as straight and Sarah, who was assigned male at birth, had not yet begun her transition.

At the time, they were both at Arizona State University, training to be teachers. Three years later, they started dating and Sarah eventually proposed to Jenni.

They moved in together in September 2004 and married the next year. The couple later had two children — Morgan in 2007 and Toby in 2009 — but the spouses had not yet expressed their true sexual or gender identities to each other.

Jenni learned that Sarah had always wanted to wear women’s clothing but felt ashamed. She had secretly put on her mother’s bikini and her sister’s clothes earlier in her life. She had started wearing women’s silk pajamas to bed, secretly wore a bra under her clothes and purchased an entire women’s wardrobe that she passed off as being for Jenni.

But Jenni knew that Sarah hadn’t really bought the clothes for her. Sarah had gotten rid of all her men’s underwear, and by 2012, she began teaching some of her online courses in women’s clothing. Jenni would often find Sarah’s female clothes in the laundry.

Jennie said she began mourning the gradual loss of her husband in private and felt Sarah gradually pulling away and becoming depressed. By 2016, their eldest son Morgan, was starting to realize that he was gay, and Sarah felt that if she couldn’t be honest with her son, there’s no way he could be honest with himself.

By May 2017, Sarah began transitioning, both socially and physically. Her son Morgan came out as gay that same year.

Now, both their sons have accepted their mothers’ identities, and the couple is sharing their story on Instagram and in the media so that other couples can see that they can remain together amid such large-scale change.

“Since Sarah came out we have been closer than ever,” Jenni said, “in all ways.”

“There’s no rule book to being trans, but this is something I know I need to do,” Sarah said. “And it’s fantastic to know that Jenni and our boys will support me all the way.”

Happy End of Pride Month, everyone! We're holding up here, rolling with the punches of being teachers in AZ, school potentially starting in one month, and the ever changing regulations and expectations. Both of us have been REALLY high anxiety lately so we haven't been as active, but all is ok. 🏳️‍🌈 🏳️‍🌈 🏳️‍🌈 #LGBT #lgbtq #pridemonth #pride2020 #lgbtteacher #LGBTfamily #love #uniquefamily #couplegoals #transgender #trans #LGBTcouple #soulmates #moms #wives #proud #mtf #happypride #lesbian #marriedpreTRANSition