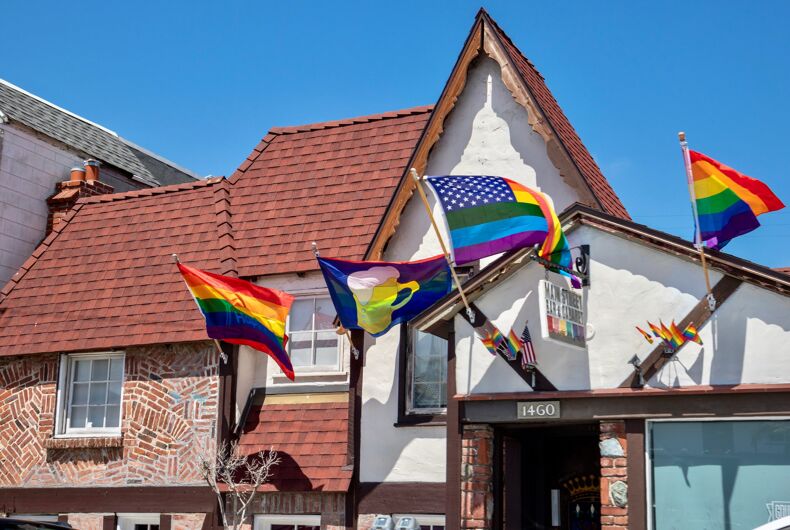 A gay bar in California known for its drag shows was attacked with Molotov cocktails last week in what the owner believes is a hate crime.

The Main Street Bar and Cabaret in Laguna Beach has been open since 1958, putting it among the oldest queer hang-outs in the world. The bar has been struggling during the coronavirus pandemic and has been closed since March.

And that was before vandals apparently tried to burn it down.

Police were called to the bar on Wednesday, July 22 when someone saw that the two front windows had been smashed. When police arrived, they saw that five other windows on the bar were broken.

And then the found five bottles filled with an unknown liquid that police believe is probably flammable. The bottles had wicks that were burned, but the bottles themselves weren’t made from an easily breakable material so they didn’t cause a fire.

“Due to the bottles not being of breakable material, this style of devices did not explode or result in a fire,” said Sgt. Jim Cota of the Long Beach Police Department. “Laguna Beach Fire personnel and OC Crime Lab personnel responded for crime scene processing.”

That is, Molotov cocktails were thrown into the building, and the only reason they didn’t burn the place down was because whoever made them used the wrong kind of bottle.

Investigators believe the attack happened the day before, on July 21.

Bar owner Wendy Nelson said that she believes this was a hate crime.

“We pray that the culprit(s) find peace in their life and the fact that more damage did not occur to our business or the four other tenants in one of the most historic buildings in Laguna Beach,” Nelson said in a statement. “This pandemic can bring people together or tear them apart. We strive for positives within the bars’ walls and encourage positives for all in their own lives.”

According to the OC Register, Nelson has owned the bar for the past six years and everyone is welcome there. The bar is known for popular performances by the drag queen Endora.

“We’ve won Best Drag Show, and we’re open to the whole community, whether you support the gay community, straight community, or the surf community,” Nelson said.