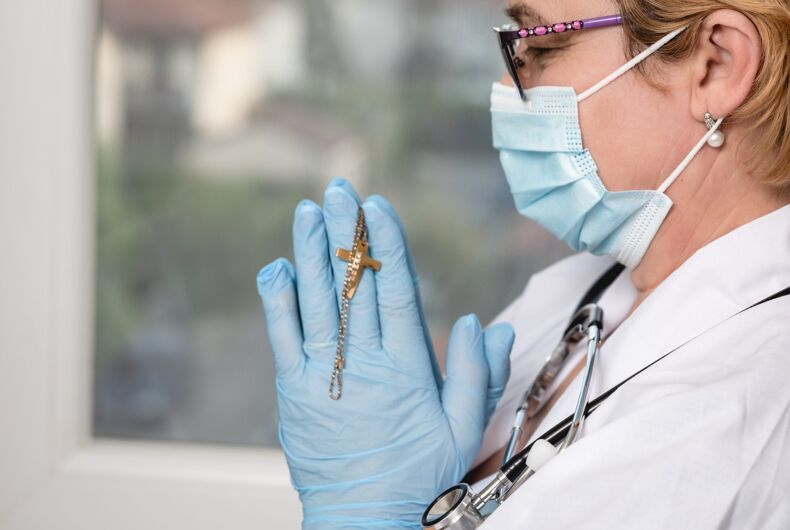 The University of Maryland St. Joseph Medical Center in Towson, Maryland is being sued after refusing to treat a transgender man. The facility says it follows the “Ethical and Religious Directives for Catholic Health Care Services” drawn up by church officials.

The University of Maryland Medical System (UMMS) purchased the hospital in 2012 from Catholic Health Initiatives, and an agreement with the Archdiocese of Baltimore means that physicians and health care professionals at the hospital have to follow the Catholic guidelines.

Related: His insurance decided to revoke a trans man’s coverage while he was on the operating table

Jesse Hammons is suing for violation of his First and Fourth Amendment constitutional rights and his rights under the Affordable Care Act (ACA) in federal court.

Hammon’s physicians recommended a hysterectomy to treat his gender dysphoria, but the hospital refused to perform the procedure. He says an administrator cited the directive and told him that gender dysphoria did not qualify as a medical issue that they were required to treat.

Catholic health care organizations are not allowed to participate in “actions that are intrinsically immoral, such as abortion, euthanasia, assisted suicide, and direct sterilization,” according to the lawsuit.

“Discrimination is not a part of religious liberty,” said Rev. Lura Groen, Hammons’ wife. “As Jesse’s spouse, I see the pain discrimination — and the fear of discrimination — causes on a daily basis. As a faith leader and taxpayer, I am appalled that this act was done at a government institution and in the name of religion.”

“The government has no business running a religious hospital,” said Senior Staff Attorney Joshua Block with the ACLU LGBT & HIV Project. “The Supreme Court has been clear that a government-controlled corporation like UMMS must comply with the Constitution. A governmental entity cannot deny medical care based on religious beliefs, and it cannot discriminate against transgender people by denying them health care that is available to everyone else.”

The ACLU is representing Hammon in court.

In 2019, a transgender man in California had already completed all the pre-operational procedures, gotten into a hospital gown, and started his IV drip when the surgeon for his hysterectomy entered the room and told him the procedure had been called off by hospital. Administrators also cited the directive.

In the middle of a global pandemic, the Trump administration finalized a rollback of discrimination protections for transgender people that were part of the ACA. The move came during Pride month and on the anniversary of the mass shooting at Pulse nightclub that left dozens of LGBTQ people dead.

The Department of Health and Human Services will only recognize “sex discrimination according to the plain meaning of the word ‘sex’ as male or female and as determined by biology.”

Editor’s Note: This article has been corrected to say UMMS purchased the hospital from Catholic Health Initiatives, and the private company runs it now.

Trump administration memo explains how to spot a transgender woman

Musician Avery Wilson came out as bisexual on his birthday