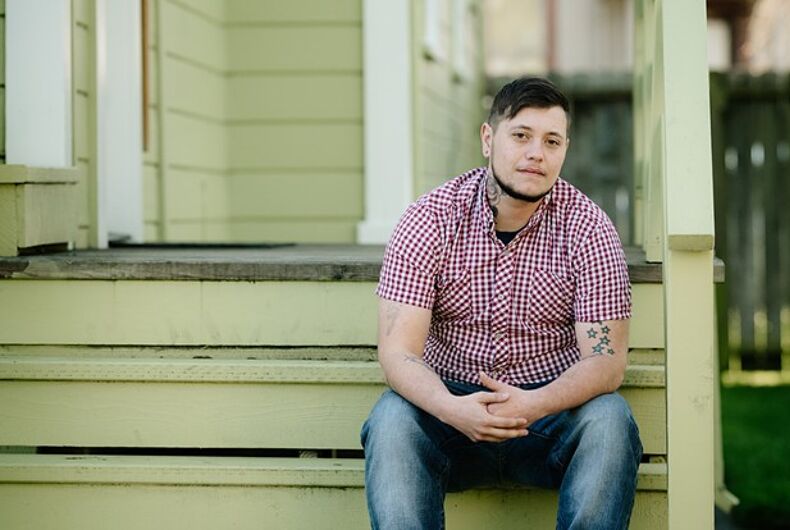 Oliver Knight had already completed all the pre-operational procedures, gotten into a hospital gown and started his IV drip when the surgeon for his hysterectomy entered the room with a distressed expression — Knight expected bad news.

As a transgender male, Knight had previously had a double mastectomy and taken testosterone for years. St. Joseph Hospital in Eureka, California was one of the only hospitals in his region, and he was delighted that it offered trans medical procedures. His hysterectomy was scheduled for August 30, 2017.

But what Knight didn’t realize was that local Catholic bishops had forbidden the Church-owned hospital from conducting his surgery because of “ethical reasons.”

“After years of working to affirm my identity in a world where transgender people are questioned constantly about their decisions, I felt hopeful,” Knight recently wrote. “I had waited so long … I was 27, and I would finally be closer to calling my body home.”

He experienced an anxiety attack, thinking of all the mental and medical preparation he’d undergone just to get to his surgery date. He began crying and was given meds to calm him down.

“Fifteen minutes after that, the hospital staff asked me to leave,” he said. “I still had booties on my feet as a nurse led me outside. I felt humiliated and queasy as I sat on the curb waiting for my roommate to pick me up.”

Related: How AfterEllen turned from a popular lesbian pop-culture website into a transphobic haven

Knight had the surgery done elsewhere and is now suing St. Joseph Hospital with help from the American Civil Liberties Union (ACLU). The lawsuit says the decision to cancel Knight’s surgery was made by a reverend “with no medical training or medical licensure.”

The Catholic Church has also submitted documents in the case, stating that “elective sterilizations” (hysterectomies) are “intrinsically evil” and:

‘Sex change’ is biologically impossible. People who undergo sex reassignment surgery do not change from men to women or vice versa … Claiming that this is a civil-rights matter and encouraging surgical intervention is in reality to collaborate with and promote a mental disorder.”

The hospital has also released the following statement:

At St. Joseph Health, we believe health care is a basic human right and that every individual seeking care should always be treated with compassion and respect. We have not had a chance to review the facts  of the case, but take these allegations very seriously. We are committing our full attention to investigating this matter.”

Fox News keeps getting worse. Maybe it’s time for Democrats to just write it off.