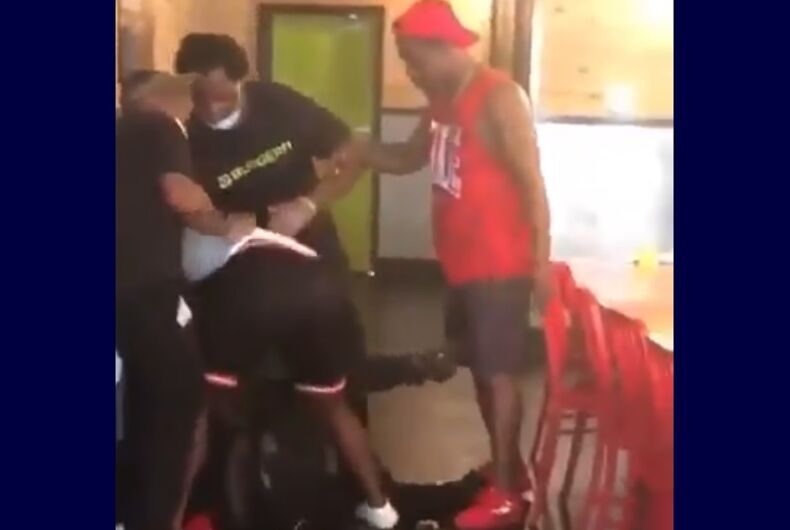 A fast food employee in Florida was called anti-gay slurs as he was allegedly beaten by a mob of customers, left bruised and injured.

Later that same day, after he filed a police report, the victim was fired.

Jaquan Walker, 24, worked at a BurgerFi restaurant in Miami Beach until he was the victim of a mob attack this past Sunday.

Walker told WSVN News that he was taking a group’s order when some men in the group made fun of his voice because it sounded gay to them.

Walker said that’s when the altercation turned violent. In an attack that was caught on someone’s cell phone, several customers started to beat him.

Eventually, the attackers go to leave the restaurant. Walker said that he was “so mad” and “embarrassed,” so he ran after them and threw a chair at them.

They came back to beat him once again.

Strong language here, but this is the video of a BurgerFi employee who was attacked, beaten and showered with anti-gay slurs before he throws a chair at one of his attackers in anger. He was fired and spoke exclusively with @wsvn pic.twitter.com/BbX72TIuxm

He said that he went to a nearby Miami Beach Police station after the men left and filed a criminal complaint. Police said that they’re considering it an anti-gay battery.

Walker said that he was injured in the attack: “I had scars on my neck. My arm was bruised. I still have pain on the side of my ribs, and I have cuts inside my mouth from them kicking me in my mouth and things.”

But when he got back to the BurgerFi, he said he found out that he was fired. He’s having trouble finding another job right now because of high unemployment and the current global pandemic.

“It makes me feel bad,” Walker said. “I come to work. I work. I mind my business. I don’t mess with nobody. I was a good worker. I was always there on time. It’s scary because you never know how far it can go.”

Police said that they are currently looking for two men in connection to the beating.

LGBTQ Nation sent a request comment to BurgerFi. This article will be updated if they respond.

Update: A GoFundMe has been set up for Walker.