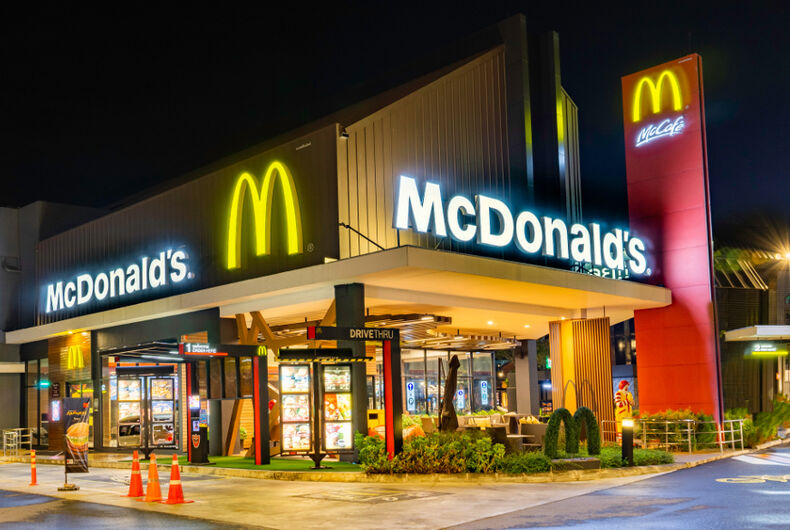 A gang of teens wearing hoods attacked a 15-year-old boy standing outside of a McDonald’s in the U.K. in what investigators are calling a “homophobic attack” that ended with the victim being rushed to the hospital afterward.

Police are now investigating the attack as a possible hate crime, even though the attackers reportedly didn’t shout any anti-gay slurs during the assault.

Related: A hater confronts a Pride-goer at McDonald’s in a disturbing viral video: ‘I’ll beat the gay out of you’

The boy, who has not been identified in the media, was standing outside of the fast-food restaurant in Liverpool at around 9 p.m. this past Saturday with his friends when a group of teens, who are reportedly older than the boy, threw a soda bottle at his face, hitting him. The group then confronted the teen and started beating him.

Surveillance video captured the attack, and security guards from the nearby supermarket interfered to help stop the beating. Afterward, the survivor was taken to the hospital for injuries.

The attack has left the boy “in a bad way” with him and his family “in bits,” but they haven’t said what his injuries were.

Although the names of the suspected attackers have circulated through the community, police haven’t made any arrests as of yet, the Liverpool Echo reports. They’re asking the public to step forward with any information or with any additional footage that may have been captured on cell phones or dashboard cameras the night of the attack.

Detective Chief Inspector Craig Sumner of Merseyside Police said, “Incidents such as this will not be tolerated and I would appeal to anyone who was in the area around Huyton Hey Road on Saturday night and saw anything to contact us.”

“We are passionate about maintaining the right of all our communities to be treated with fairness, dignity, and respect and by working closely with our partners will continue to work to eradicate hate crime of all forms.”

Anyone with information is asked to direct message the local police on Twitter @MerPolCC or to contact @Crimestoppers using the reference number 20000162007.