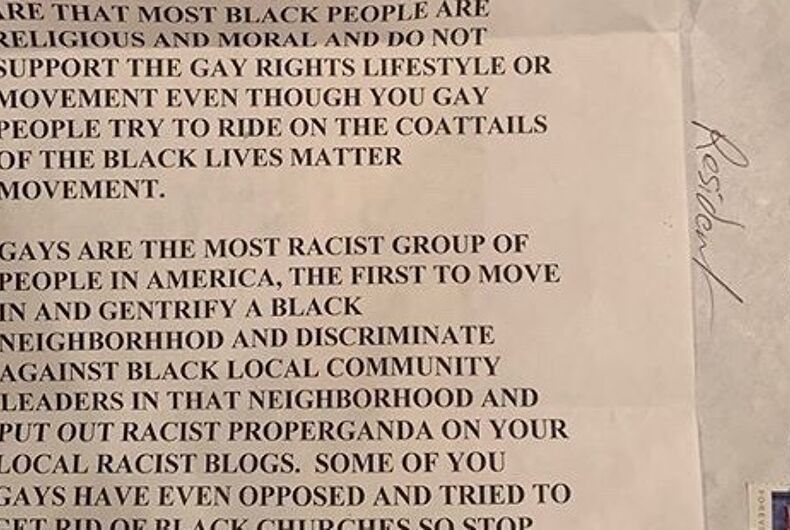 A section of a letter sent through the mail to a DC residentPhoto: PoPville

An unnamed D.C. resident who posted both Pride and Black Lives Matter signs was shocked to get a nasty letter in the mail from “black heterosexuals.” The unsigned letter asserted that the two civil rights causes were not equal because “gays are the most racist group of people in America.”

After a photo of the letter was posted on one of the city’s most popular blogs, PoPville, the best part of the city reacted strongly to some of the worst.

“Gays are the most racist group in America,” the letter continues, “the first to move in and gentrify a Black neighborhhod [sic] and discriminate against Black local community leaders in that neighborhood and put out racist properganda [sic] on your local racist blogs.”

“Some of you gays have even opposed and tried to get rid of Black churches so stop being hypocrites.”

The comments section under the photo quickly lit up with neighbors pushing back on the premise of the letter, noting that Black LGBTQ people exist.

“Imagine, if you will, a world in which black people can be gay,” one person wrote. Another commenter simply left a list of famous Black LGBTQ people.

The notion of intersectionality also seemed to escape the letter writer, but not the respondents.

“The leaders of BLM make no bones about the fact they are intersectionalists. In fact, the national leadership is led by a member of the LGBTQ+ community,” one person noted.

“Alicia Garza is one of the three founders of the Black Lives Matter movement. She’s also a queer woman,” another person wrote, before acknowledging that racism is an issue that needs to be addressed.

“Having said that, the anonymous author isn’t far off in their critique of the rampant racism in the white gay community, and particularly our role in gentrification.”

But commenter Keeks may have summed up the issue best for most LGBTQ commenters.

“LGBT people are still targeted with notes, slurs, and hatred like this all the time,” they wrote. “It still exists here in DC and across the country despite important legislative and legal wins. We’re used to it (unfortunately) but doesn’t mean we’ll be intimidated to stop flying our flags and fighting for black lives.”