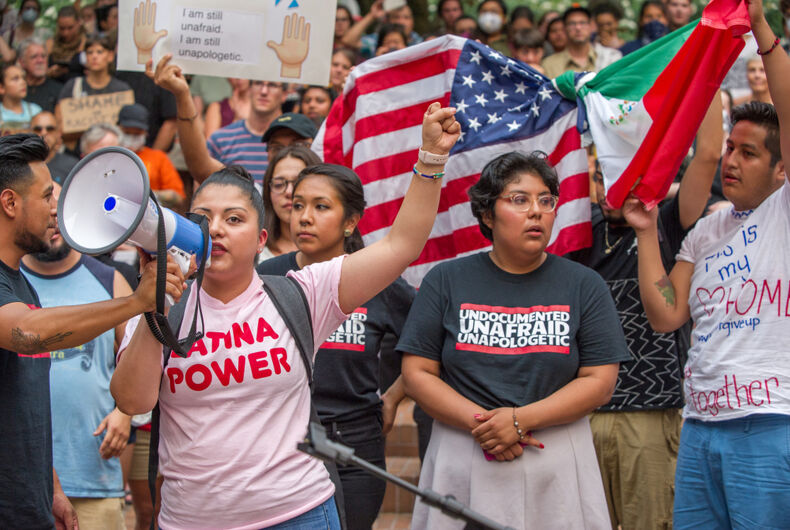 In a 5-4 ruling, the U.S. Supreme Court decided that President Donald Trump’s attempt to end former President Barack Obama’s Deferred Action for Childhood Arrivals (DACA) program, a path to citizenship for foreign-born immigrants brought to the U.S. as children, was “arbitrary and capricious.” The ruling will protect nearly 700,000 immigrants in the U.S. from deportation while they seek a path towards U.S. citizenship.

In September 2017, Trump rescinded DACA, a program that allowed some people who came to the United States as minors without documentation to apply for a two-year period of deferred action from deportation and a work permit. Numerous LGBTQ activists have formed the backbone of the opposition to Trump’s move.

“We do not decide whether DACA or its rescission are sound policies. ‘The wisdom’ of those decisions ‘is none of our concern,’” Roberts wrote in his majority opinion. “We address only whether the agency complied with the procedural requirement that it provide a reasoned explanation for its action.”

Roberts wrote that the federal agency that rescinded DACA “failed to consider the conspicuous issues of whether to retain forbearance and what if anything to do about the hardship to DACA recipients.”

“That dual failure,” Roberts continued, “raises doubts about whether the agency appreciated the scope of its discretion or exercised that discretion in a reasonable manner.”

Today’s decision by the U.S. Supreme Court also benefits LGBTQ immigrants brought to the U.S. as children who would face persecution and even death if they returned to their anti-LGBTQ countries of birth.

The court’s ruling today is an affirmation that Dreamers and DACA recipients–tens of thousands of whom are LGBTQ+ — belong here. They grew up here. They work here, go to school here and have served in our military here. Approximately 27,000 of them are currently on the front lines of the COVID-19 pandemic — risking their lives to protect ours in hospitals and grocery stores, making deliveries and as first responders,” Rick Chavez Zbur, executive director of Equality California, said.

“While we are pleased with this ruling, our fight does not end here. We know that this administration will continue to attempt to terminate this program. That is why we encourage those who receive DACA protections to continue their journey and we vow to continue our fight for real, meaningful immigration reform legislation passed by Congress and signed by the president.”

“This is a critical step in the right direction for young people across the country,” said HRC President Alphonso David. “The DACA program provides an opportunity for young people, including LGBTQ Dreamers, to live productive, safe, and happy lives in the United States. Today’s ruling by the Supreme Court keeps the DACA program in place, but there is still work left to be done. Now, we must elect pro-equality leaders to Congress to pass a clean DREAM Act — that is how we permanently protect the nearly two million Dreamers, for whom today’s ruling is only a temporary solution.”