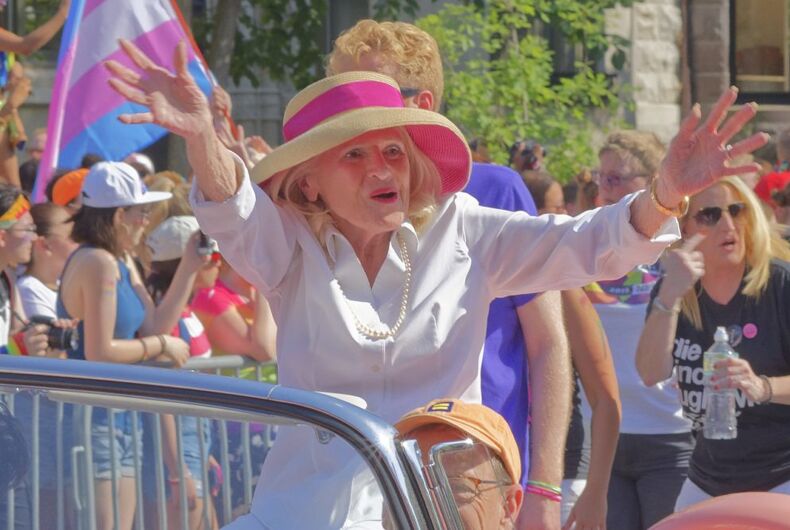 And if there’s a central figure who captures the struggle for recognizing our relationships, it’s one of the plaintiffs, Edie Windsor. Her resolve to legalize same-sex marriages paved the way for the rights that the rest of us enjoy today.

Windsor’s quest was the result of a long, loving relationship. Windsor first began dating Thea Spyer in 1965, who proposed to Windsor two years later. In the absence of legal marriage, the couple remained together for decades. In 2007, Windsor and Spyer finally able to tie the knot, in Canada. Spyer died two years later, and that’s when the couple’s legal status became the focus of a major lawsuit.

Although Spyer and Windsor had been together for 44 years and were legally married in Canada, the US government presented Windsor with a bill for $363,053 in federal estate taxes on her inheritance of her wife’s estate. Normally, married couples pay no estate taxes, but thanks to the Defense of Marriage Act, the federal government simply refused to acknowledge Windsor and Spyer’s marriage, even though the state of New York did.

In 2010, at the age of 81, Windsor sued the US government. It took three years for the case to make its way to the Supreme Court, but when it did, a majority of justices sided with Windsor, striking struck down DOMA on the grounds that its “principle purpose is to impose inequality” although they didn’t declare marriage a national right.

The ruling in her case had a domino effect, as judges around the nation struck down marriage bans in state after state. Just two years later, conservative catholic Justice Anthony Kennedy, writing for the 5-4 majority, agreed that marriage is a right that should be afforded to same-sex couples.

“I have seen more real progress in the past three years than the nearly two decades of activism before it,” she told the crowd that day.

Of course, the reason for the progress had a lot to do with gay and lesbian seniors who were fed up with the government’s refusal to recognize decades-long loving relationships. Seniors were among the most vociferous advocates for marriage equality, with good reason. Without a legally recognized relationship, they faced a series of financial and personal injuries. Surviving partners had no access to Social Security or veterans survivor benefits.

“In sickness and in health, through thick and through thin, til death do us part,” is what we hope for when we make a commitment to a person we love — and having our commitments respected in law as well and love is at the heart of why the freedom to marry matters to us all,” says Evan Wolfson, founder and president of Freedom to Marry.

“No legal form or arrangement brings as big a safety net as the two words, ‘I do,’ and for most people, marriage brings great happiness in life and protection as we age and die.”

Windsor was hardly the only senior pushing for her rights. Long-time activist Robin Tyler and Diane Olsen were plaintiffs in the challenge to California law that briefly opened the door to marriage equality in 2008.

By the time of what Tyler called her “Big Fat Jewish Lesbian Wedding,” she was 66. The couple were together for 25 years at the time of Olsen’s death at age 65.

Ron Wallen and his partner, Tom, also took advantage of the brief window for marriage in California.

“You’d be amazed at how after 55 wonderful years together…our perfunctory dry civil ceremony–with no frills and only one witness–turned my husband and me into blubbering emotional babies,” Wallen later recalled.

When his husband died three years later, Wallen sought his husband’s Social Security benefits, which were much higher than his own. He was denied, under DOMA. Wallen later testified before Congress about how his household income dwindled from more than $3,000 a month to $900 because of the government’s stance. As a result, he lost his home.

“After a million delays, I received what I was due–what Tom and I had worked so hard to earn,” Wallen said.

Thanks to the advocacy of Windsor, Wallen, Tyler, Olsen, and hundreds more like them, other seniors have the safety net–and the recognition–that they deserve.

Still, the marriage victory and the more recent employment victory doesn’t mean the fight is over.  Discrimination doesn’t end overnight.

“SCOTUS decisions like marriage equality and the employment discrimination protections are especially meaningful for our LGBT pioneers who have been fighting for decades to see these changes,” says Michael Adams, executive director of SAGE USA, the country’s oldest organization dedicated to LGBTQ elders.

“While it is crucial for our community to be recognized as equal in terms of who we can marry and what jobs we can have, it is also important that we remember that there is still plenty of work to do, particularly to protect our Black and Brown elders from systemic racism and discrimination.”