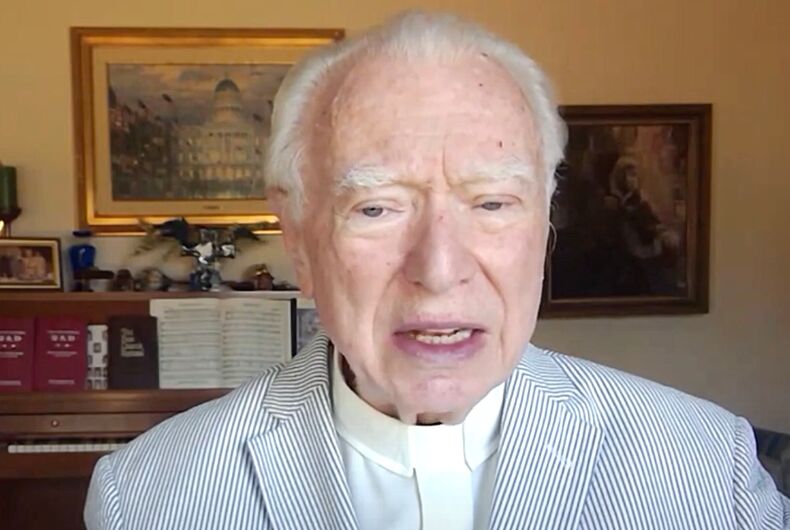 Reverend Lou Sheldon founded one of the first anti-LGBTQ hate groups, the Traditional Values Coalition. He was best known for his vitriol and bigotry.

Sheldon has died of a “longstanding condition” at age 85 according to his family. They did not specify whether or not the vicious conservative died after filling up with his own bile.

The Traditional Values Coalition was designated an anti-LGBTQ hate group in 2010 by the Southern Poverty Law Center.

Sheldon’s bigoted and outlandish claims about the LGBTQ community were often the standard for other hate groups to follow. While other religious right hate groups delved deeper into other issues like abortion, he mostly preferred to demonize LGBTQ people.

“Americans should understand that their attitudes about homosexuality have been deliberately and deceitfully changed by a masterful propaganda/marketing campaign that rivals that of Adolph [sic] Hitler,” Sheldon wrote in a “special report” for the organization. “In fact, many of the strategies used by homosexuals to bring about cultural change in America are taken from Hitler’s writings and propaganda welfare manuals.”

Sheldon’s daughter, Andrea Lafferty, is the current head of the organization and has continued the group’s war on LGBTQ rights.

Sheldon and Lafferty held large sway in the Republican party at one time, visiting the White House dozens of times and personally meeting repeatedly with President George W. Bush, despite pumping out some of the cruelest attacks on LGBTQ rights in American politics.