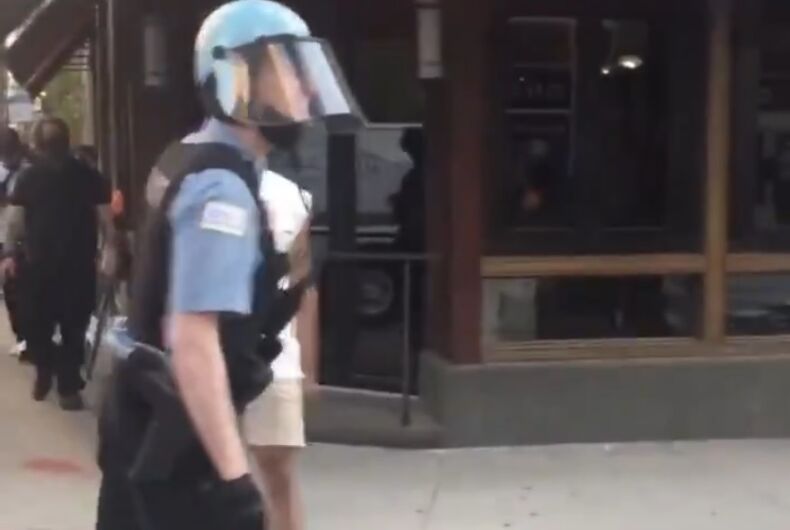 The police officer from the videoPhoto: Screenshot/Twitter

A video has surfaced on social media that appears to show a Chicago police officer calling a protestor a “f****t.”

In the short video shared by Chicago drag queen Kim Passable, a police officer is walking towards a van marked “Chicago Police.” An object is thrown at the officer, who turns around and shouts at the crowd.

White gays who’ve been silent so far, he said “wait till I turn my back, you f*ckin f****t”. If it takes you till this to be angry, shame on you, but hey come join. pic.twitter.com/73QszndmAw

The video was shared this past weekend as protests were held all over the country following the death of George Floyd in police custody. In video that was shared online last week, Minneapolis police officer Derek Chauvin kneeled on Floyd’s neck for nearly nine minutes while he was unarmed and saying that he couldn’t breathe.

“We see the game he’s playing because it’s so transparent and he’s not very good at it,” Lightfoot said during a press conference.

“He wants to show failures on the part of Democratic local leaders to throw red meat to his base. His goal is to polarize, to destabilize local government and inflame racist urges. And we can absolutely not let him prevail.”

“I will code what I really want to say to Donald Trump. It’s two words: It begins with F and ends with YOU.”

LGBTQ Nation requested comments on the video from the Chicago Police. This article will be updated with their response.

One of America’s original anti-LGBTQ activists is dead