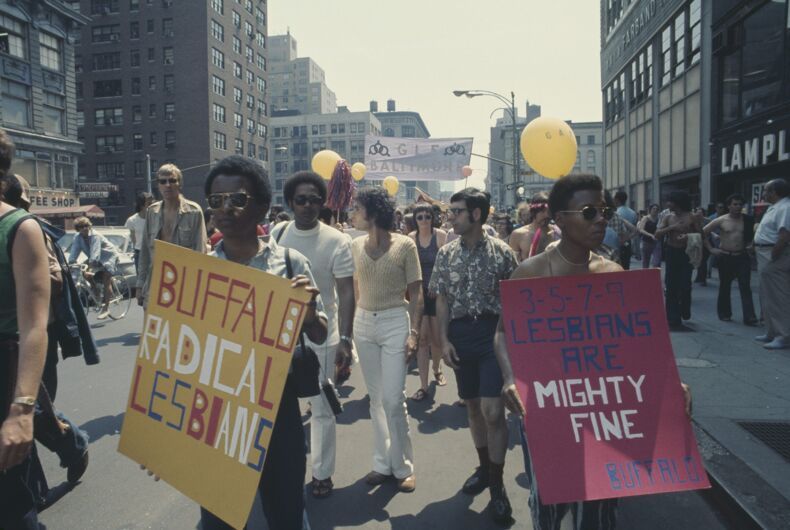 In this photo by Fred McDarrah, a simple, plain but powerful message is seen on a placard held up by American lawyer Dick Ashworth, during Gay Liberation Day, June 30th 1974. Ashworth and his wife Amy were key in the inception of PFLAG, and in a quote attributed to Morty Manford, who was present when the police raided the Stonewall Inn in 1969 (and whose mother Jeanne also helped to found PFLAG), ‘I think the most important single organization in the United States is the parents…’

‘Life Is Good With Women’ – so says one of the placards in this early parade in the Back Bay area of Boston in 1975. In that same year, Elaine Noble, a graduate of Boston University, became the first openly lesbian or gay candidate to be elected to a state legislature in the United States and served two terms as representative for the Fenway-Kenmore and Back Bay neighborhoods.

This image shows New York activism on the streets before Pride was Pride, during the Christopher Street Gay Liberation Day in 1971. Members of the Buffalo Radical Lesbians may have been geographically removed from the bigger centers of activism, but the fight for LGBTQ rights and equality is a universal issue. This photo was part of an edit the Getty Images Archive Editors undertook to unearth more imagery reflecting gay life, from its analog archives.

Pride in Pictures: Juggling through life