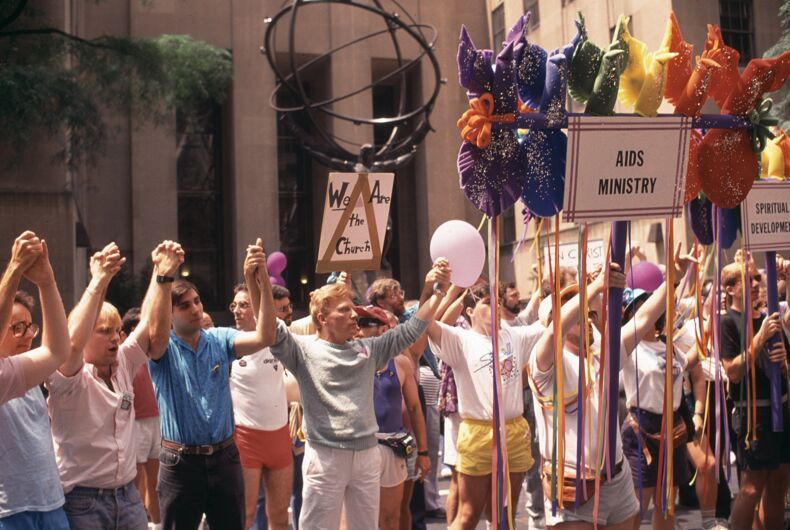 View of marchers as they stand, with raised hands clasped, in front of Rockefeller Center (across from St Patrick's Cathedral) during the New York City Pride March, June 25, 1989. The man at fore center wears a t-shirt that commemorates the 20th anniversary of the Stonewall Inn riots.Photo: Mariette Pathy Allen/Getty Images

By the late 1980’s the world had spent nearly a decade in the battle against HIV/AIDS, and New York was hit harder than anywhere else in the U.S. This photo by Mariette Pathy Allen, and just recently unearthed from the Archives, shows solidarity and the joining of hands across members of an AIDS ministry outside the Rockefeller Center during Pride. Among the visible signs are ones that read ‘AIDS Ministry,’ ‘Spiritual Development,’ and ‘We Are the Church.’ The religious response to the AIDS crisis was complex, ranging from compassion to discrimination. Anti-gay protestors, across the street by St Patrick’s Cathedral, were a common sight.

It was 1989 and marchers, led by a man in a Keith Haring T-shirt during Pride, hold up placards highlighting the lack of progress made in the fight against HIV/AIDS. As the slogan says: ‘9 years of AIDS, one drug approved for HIV. ’ In 1988, the previous year and for the first time, the World Health Organization had designated December 1st as World AIDS day in the hope that countries would unite in its support of those affected. The T-shirt displays the now iconic message – ‘Ignorance = Fear, Silence = Death – Fight AIDS Act Up’. Haring’s art would of course play a critical role in drawing attention to and making noise about HIV/AIDS.

The photography, Mariette Pathy Allen, has been photographing gay life and the transgender community across 4 decades. Through her artistic practice, she has been a pioneering force in gender consciousness, contributing to numerous cultural and academic publications about gender variance and lecturing throughout the globe.

Anita Bryant, the former singer, Miss Oklahoma beauty pageant winner, and notorious anti-gay crusader was central to some of the first organized opposition to gay rights. In 1977 her campaigns help lead to the repeal of an anti-discrimination ordinance, a set-back in the fight for equality. But in drawing attention to her cause she inadvertently energized support for pro-gay activism. In the this photo, taken in the same year during San Francisco’s 5th Gay Freedom Day, the message on this T-shirt is simple, short, and very clear.

Pride in Pictures: The mom we all need