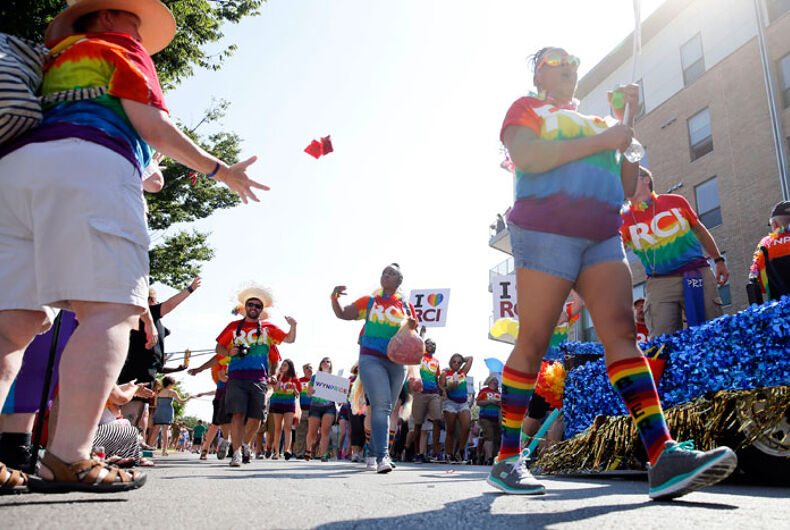 The Indianapolis City-County Council will honor LGBTQ people of color for Pride month. The council will issue the proclamation this evening.

The state has seen some of the most vociferous fights over equality over the past decade. Vice President and former-Governor Mike Pence notoriously signed a “religious freedom” law (RFRA) that allowed businesses to blatantly discriminate against LGBTQ people before it was “fixed” after a national outcry to specify it couldn’t be used to discriminate against the community.

The resolution honors the people of color who have pushed equality forward in the Hoosier state and encourages LGBTQ people to register to vote.

Earlier this year, the council swore in its first LGBTQ caucus after residents elected three more members of the community to serve. Vice President Zach Adamson was the first out gay elected official in the state.

“Pride has its origins in protest and activism,” Adamson said. “Being proud and unashamed of who we are is an incomplete action if it’s not also paired with the ultimate show of activism and resistance. Voting.”

“WHEREAS, the City-County wishes to recognize Indiana’s vibrate and visible LGBTQ community, because not only is it one of the largest in the nation, but it’s also an accurate representation of a diverse community,” the proclamation reads. “Of the approximately 230,000 LGBTQ Hoosiers, about 66,400 LGBTQ Hoosiers are also a person of color; Further, about 8,000 people in Indiana identify as a black or brown transgender Hoosier; Our black, brown, and transgender LGBTQ Hoosiers are the reason why Indiana was able to fight back against destructive anti-LGBTQ policies like HJR-3 [the state’s proposed constitutional amendment to ban same-sex marriage] and RFRA.”

“LGBTQ Hoosiers, especially queer and trans people of color, have long deserved to be recognized for their relentless resilience and heart in fighting for opportunity and acceptance in our state, and it’s an honor to recognize how much work it took just to get us to this point,” said Ali Brown, City-County Councillor for District 5.

“As the only woman and mother of the Caucus, I can also emphasize the significance this has on LGBTQ families across Indiana, because now we are validated and considered equals in the place we all love to call home.”

Pride festivities have been canceled this year due to the coronavirus pandemic and the council recognizes that.

“The global pandemic may keep Hoosiers at home this June for Pride, but LGBTQ Hoosiers can still show their power of Pride and visibility by committing to vote this Election Day on November 3, 2020,” the resolution reads.

“As Pride is being experienced so differently this year, for many reasons, the demand of the moment is our civic duty: vote,” said Keith Potts, City-County Councillor for District 2.