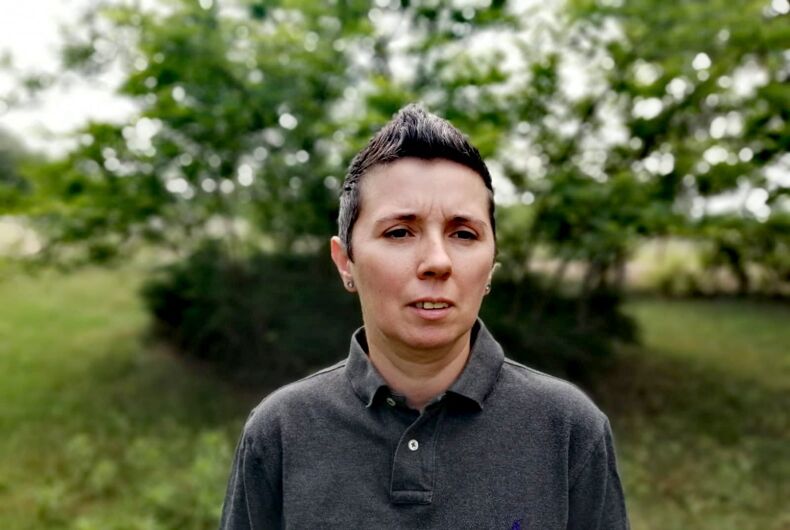 “Everyone feels like a second-class citizen, like an outcast and someone that the government does not respect,” Krisztina Orbán, Vice President of Transvanilla Transgender Association, told LGBTQ Nation after Hungarian Prime Minister Viktor Orbán’s government amended the Civil Registry Act last month, making gender recognition illegal for transgender and intersex people.

The amendments to Article 33 of the Act mean that a person’s sex will be determined by their sex at birth. Many transgender and intersex people are now living in limbo since their right to self-actualize and legally identify have been stripped away. Some are contemplating suicide, while others are considering leaving the country.

Related: Coke released some cute gay ads in Hungary. Now the right is calling for a boycott.

The activist and the Prime Minister are not related.

Krisztina says that the changes to the act will lead to further discrimination, harassment, and stigmatization of transgender persons in Hungary.

This latest direct attack on transgender rights by the Orbán regime takes place within a context of increasing authoritarianism and rising restrictions on civic space. An increasingly hostile environment for civil society organizations and deteriorating freedom of expression, alongside attacks on LGBTQ rights, have landed Hungary on the CIVICUS Monitor watchlist, a list of countries that have seen a rapid decline in fundamental civic freedoms – including the freedoms of association, peaceful assembly, and expression – in recent months.

Anti-LGBTQ rhetoric has been fuelled by members of Parliament from Orbán’s ruling Fidesz party, who have made derogatory remarks about LGBTQ people, trolled Pride events, and boycotted business campaigns featuring same-sex couples.

After attempts to engage with government authorities failed, activists have taken their fight to the highest court in Hungary, seeking to have it annul the new law and declare it unconstitutional. And although the COVID-19 emergency measures prohibit gatherings and protests, the LGBTQ community is mobilizing online, and seeking international attention, urging international bodies to amplify the plight of transgender persons in Hungary.

“We have tried to engage directly with the government to hold it accountable, but it has not worked so far. We represent a minority group and cannot fight this government alone. But international institutions do sometimes influence the government’s actions,” said Krisztina.

In a final appeal, the Transvanilla Transgender Association and others have turned to the European Union (EU), its executive branch, the European Commission, and the European Court of Human Rights. While they are confident that the court will rule in favor of transgender rights, as it has done before, they have less confidence in the EU, whose deafening silence has become a pattern.

The EU previously issued a warning to Hungary to respect democracy and the rule of law during the COVID-19 pandemic. However, this warning was just a mere slap on the wrist without any sanctions. The European Commission has failed to speak out against Hungary’s erosion of transgender rights.

This raises concerns that the EU’s hallowed mechanisms may safeguard LGBTQ rights on paper but fail in practice to protect and respond to instances of violence and blatant discrimination against groups on the basis of their sexual orientation, gender identity, and expression, and sex characteristics.

Activists alongside Krisztina are calling for the EU to cut its funding to Hungary, one of the largest recipients of EU aid. If the EU continues its silence and fails to condemn Viktor Orbán’s government, a dangerous precedent will be set for neighboring countries where ruling parties are driving anti-LGBTQ agendas to appeal to conservative support bases, such as Poland, which recently made headlines for declaring ‘LGBT-free zones’.

It is imperative that international civil society and regional and international human rights mechanisms heed the call by Hungarian transgender activists to repeal amendments to Article 33, given its dire consequences for the dignity and wellbeing of LGBTQ and gender-diverse people in Hungary, and for the quality of Hungary’s democracy.

During this Pride month, LGBTQ people, and people of diverse sexualities around the world, remind us that gender is not binary and that sex at birth does not always equate to gender. Patriarchy and the ideology that gender is fixed and innate limit the scope of inclusion, systemically, and institutionally excluding LGBTQ groups and rendering them vulnerable to multifaceted violence, discrimination, and killings.

It is important that allies and communities of LGBTQ persons start showing up in meaningful ways that go beyond solidarity. The fight for LGBTQ rights is a critical human rights battle that needs every one of us imagining ways of being co-responsible.

Mawethu Nkosana is LGBTQI+ advocacy lead at CIVICUS and Aarti Narsee is a civic space researcher at CIVICUS.