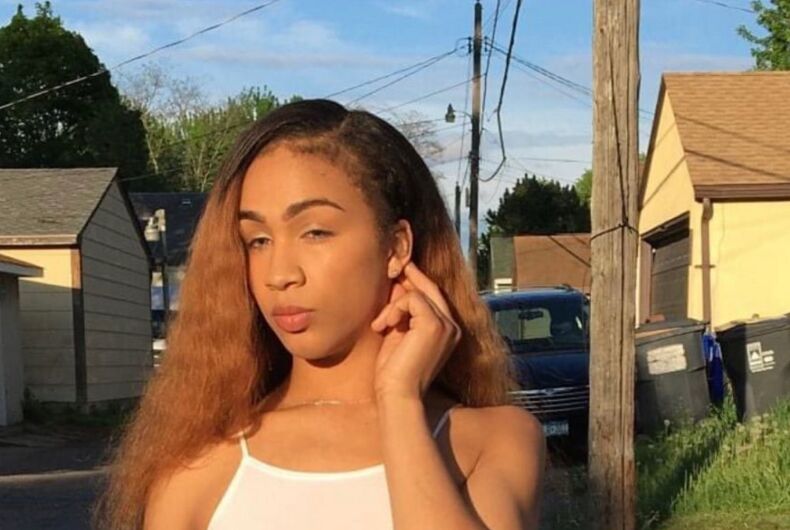 A black transgender woman was beaten by a crowd of men, according to early reports on social media.

The victim has been identified as Iyanna Dior, and people posting a video of the attack to Twitter say that the aggression occurred this past Monday.

The video, which does not show what led up to the attack, shows a woman being beaten by at least a dozen men at a store. She is pushed out of the store by the crowd but worked her way back in and hid behind the cashier’s counter.

“You gotta come out,” someone in the crowd yelled. Then a man went behind the counter and pulled her out.

At least one person referred to Dior with “fa***t ass” in the chaotic video that has been viewed 1.8 million times so far.

“Iyanna Dior, a black trans woman, was beaten yesterday by a crowd of over 30 people over a fender bender,” wrote activist and author Hope Giselle in a tweet.

Dior wrote on Facebook that she is “OK” after the attack, suffering only minor injuries.

“I Just Need Some Time To Process Everything That’s Going On Thanks To Everyone Reaching Out Making Sure I’m Ok ❤️ Imma Talk Real Soon,” she wrote in a post.

The beating of Iyanna Dior is heartbreaking for so many reasons. We’re literally in the street decrying the violence against Black bodies. These men could’ve been doing that, but they decided to side with the structures that seek to harm us by doing the work for them. #iyannadior pic.twitter.com/Uen8Ge0eiN

Her name is #IyannaDior &
she’s been subjected to transmisogynoiristic violence.

If you know how we can directly support her DM us https://t.co/vnuH29dmzN

Iyanna Dior is a young black transwoman who was beaten up by a huge crowd of men. In the middle of a protest for black lives. Black lives still matter when you’re trans. Its the start of Pride. We need to do better. We see you and stand with you Iyanna. #BLACKTRANSLIVESMATTER pic.twitter.com/TjIzwe4f4m

Others shared her ID on Cash App ($NajaBabiie) so that people can help her with medical bills and other expenses.

If you guys want to help a black trans woman who was brutally attacked by a mob of men pay for medical bills her cashapp is $NajaBabiie #IyannaDior pic.twitter.com/ve4Jdu7PMN