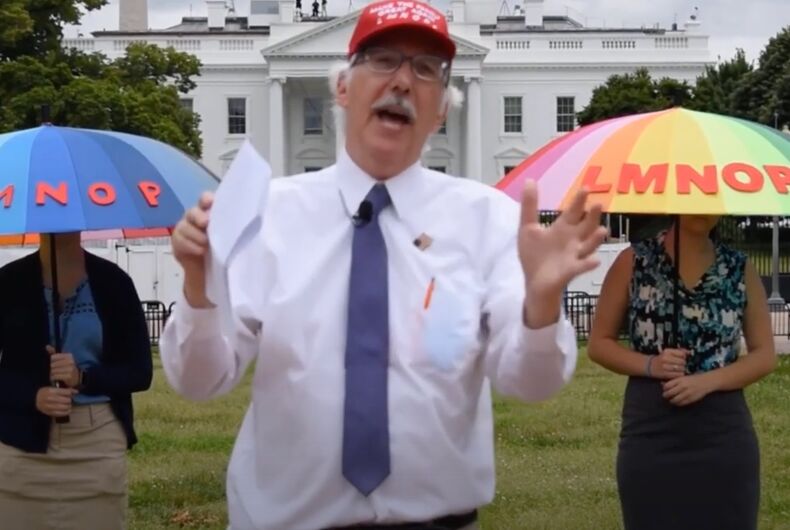 The letters stand for “Lifestyle of Mainstream Normal Ordinary People,” he said.

Delgaudio’s organization Public Advocate USA was recognized as an anti-LGBTQ hate group by the Southern Poverty Law Center in 2010. They’re best known for kooky street theater and wild claims that shadowy groups of “homosexuals” have infiltrated the government.

From cheesy opening music (complete with hand-clapping) to the awkward women holding rainbow-colored umbrellas behind him, the video is as ridiculous as the group’s publicity stunt.

Delgaudio makes it a point to tell his followers that he recorded the video in Lafayette Park across from the White House. The area has been the scene of multiple clashes with federal authorities as protesters demand justice for George Floyd, a Black man murdered by a white Minneapolis police officer.

Attorney General William Barr had the federal officers forcibly clear the area on Monday, using tear gas and rubber bullets on peaceful protesters, so President Donald Trump could walk across the park to take campaign photos with a Bible outside of a historic Episcopalian church damaged in rioting.

The Episcopalian bishop in charge of the church decried the violent authoritarian move, saying Trump’s use of the Christian holy book as a prop after physically harming church personnel and medics who were outside of the building was a desecration of sacred ground.

Trump repeated his publicity stunt on Tuesday with a trip to a shrine to former Pope John Paul II. The Catholic Archbishop for D.C. condemned the trip, saying Trump intimidated peaceful protestors for “a photo opportunity.”

Even Delgaudio is speaking up about the assault on church authorities and peaceful protesters in a park where he and followers often stage anti-LGBTQ protests.

“We condemn the wrongful death of George Floyd in Minneapolis, Minnesota by a corrupt police officer and support the right of peaceful demonstrations. Public Advocate practices peaceful events for 40 years including here at Lafayette Park.”