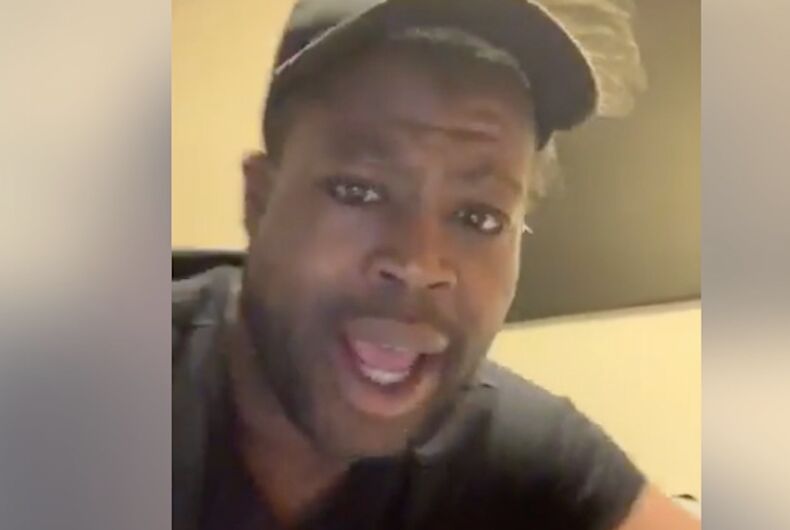 Despite losing a relative to COVID last week, singer Chris Weaver was one of the attendees of the now-infamous New York City “Rona Rave” that hosted a DJ and 30 people in an apartment without face masks or social distancing.

Weaver has posted a Facebook Live video addressing his attendance while decrying “cancel culture” that subsequently inspired social media users to identify and shame the attendees online. At no point does he actually apologize for attending and putting other people at risk.

“I know some folks have removed themselves from social media and stuff like that. I’m not doing that,” Weaver says in the video. “I’m human. I make mistakes just like you make mistakes. It’s life. I fully understand that I have to deal with the repercussions of what I did and that it’s just a reality that we have to face. But I won’t be scared or ran into a hole or a box because you don’t agree. Okay?”

“Was it dumb?” he continues. “Yes, it was. If I had to do it all over again, would I have attended the event? I would have not.”

In the video, Weaver, who also performs drag under the name Nedra Belle, expresses his appreciation and gratitude for medical and essential workers on the frontline, adding, “I don’t take it lightly. I do have friends who I know are serving on the front lines, and I’ve actually reached out to a couple of them to let them know that if they need anything, I’m there and I would love to help in any way I can.”

He also says, “Unfortunately, I have just lost a cousin last week, Sandra Grant, rest in peace. 31-years-old, I just lost her to COVID-19. She was 31.”

“Everybody’s all up in arms and so upset that I can understand,” he continues. “There are thousands and thousands of people who have perished from this but I didn’t go out with the intent to hurt anyone. I didn’t go out with the intent to say, ‘Oh I’m gonna go out to this party and not wear a mask to get the virus and to spread the virus.’ That’s not what I did, that’s not what I intend on doing and that’s not who I am.”

At this point, he addresses “cancel culture,” the social practice of “canceling” or withdrawing support from public figures after they do or say something considered objectionable or offensive. Weaver says:

The videos were released and I was in the video. And now of course there’s this call, y’know. Of course, they’re dragging us on social media. And there’s this call for some of us who were involved to be canceled….

And for all these negative comments, let me tell you something about the gay community, the LGBTQ+ community. We do so well … What we do is we are so good at building each other up. But we’re even better at tearing each other down. And the problem with that is, we can drag and drag and drag folks all day and all night, but there’s never a chance. Where is the chance for redemption? Where’s the chance for somebody to make up for their mistakes or to get it right? We don’t give that, but we wanna cancel folks.

Some people are going to look at this video and say… that’s the thing, people can issue an apology and people are never satisfied. People just want something to attack people on…. If you wanna cancel me, cancel me, I mean that’s, it is what it is…. And I’m hoping that you open up your hearts, not just for me… but for those who you have attacked…. Please know that your reaction causes reaction. Think about the person on the other side.

“We don’t know all that we need to know about this virus,” he says. “And we don’t know how long we’ll be in this situation, and we’ve been in it for longer than we thought we would be. But there’s something that needs to be said about us as human beings and our resilience and our love for one another and that we can grow from this together.”

Thus far, New York has had over 327,000 cases of confirmed coronavirus and 20,828 deaths — over twice as many than any other U.S. state. New York Governor Andrew Cuomo recently extended his mandatory stay-at-home order until May 15 and said he’ll likely re-extend it even longer.

People can contract coronavirus by inhaling infected water droplets passed by people’s breath or by touching contaminated surfaces which can spread the virus for days after contact. People can also be asymptomatic carriers of the disease without knowing it, endangering immunocompromised and elderly people who are most likely to experience serious symptoms or die from it.

Black Americans are more likely to have underlying conditions, like asthma and diabetes, that make them more vulnerable to this virus. They’re also more likely to live in areas with air pollution, in multi-generational homes with elderly people who live alongside younger relatives who may be infected, and are less likely to have jobs they can work from home, putting them at greater risk of publicly contracting the virus on public transportation.

Posted by Chris Weaver on Wednesday, 6 May 2020