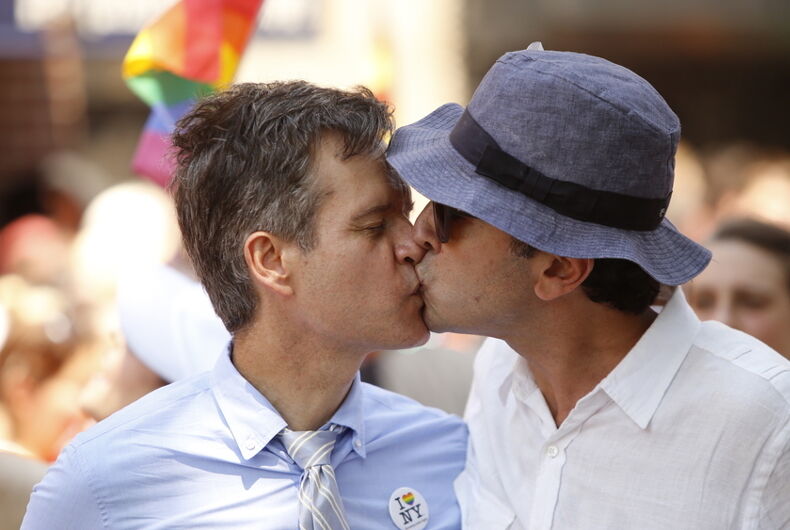 Out gay New York State Senator Brad Hoylman just became one of the many gay and bi men rejected when trying to donate blood, even though he (and they) adhered to the U.S. Food and Drug Administration’s recently changed guidelines allowing gay and bisexual men to donate blood after being sexually celibate for 3 months.

Hoylman, who is married with children, wrote in a May 12 letter to the Christopher Hillyer, President and Chief Executive Officer of the New York Blood Center (NYBC), “I was rejected as a donor because NYBC continues to use the outdated screening guidelines of a waiting period of one year instead of three months for gay and bisexual men like me.”

Related: It’s time to end the ban on gay blood donation. People are dying & we can help.

He tells Hillyer that he’ll continue to fight for changes to the FDA’s blood donation guidance, stating, “This policy is rooted in homophobia and limits our nation’s supply of blood and plasma, which I know you agree is more crucial than ever for the research and treatment of COVID-19.”

Last week, I tried to donate blood. I was rejected for being gay.

We’re in the middle of a nationwide blood shortage, but gay and bisexual men are still being treated like second-class citizens.

Here’s my letter to the New York Blood Center urging them to update this policy: pic.twitter.com/TnkpY9IRwm

Amidst the ongoing coronavirus epidemic, both Brazil and Hungary recently dropped all prohibitions against blood donations from men, joining the ranks of other countries like Italy, Mexico, Russia, South Africa, and Spain which allow everyone to give regardless of sexual orientation.

The nation’s blood centers are also upset. They’re being blamed for turning away gay and bi men, but they say their hands are tied until the FDA updates paperwork and computer systems blood banks are required to use.

“[Potential donors] were so angry with us,” Linda Goelzer, a spokesperson for Carter BloodCare in Dallas, said. “People were calling and saying ‘You lied to us, you’re not following the FDA,’ and it’s so unfair. Every blood center in the country has been advocating for these changes, but we have to go through some very rigorous protocols to make these changes so that we can still keep safety in the blood supply and in the process.”

“When the FDA says the word ‘immediately’ that means something totally different in our world,” said Goelzer. “It takes about three months to implement this stuff but [the FDA] is relying on us to communicate that to the public.”

If the FDA got rid of its prohibition on gay and bi male blood donations, the U.S. would have 175,000 likely gay and bi male donors who’d give an estimated 300,000 pints of additional blood annually, potentially saving over a million lives each year, according to a 2014 study from the University of California, Los Angeles School of Law Williams Institute.

On April 22, attorneys general from 19 states and the District of Columbia signed a letter urging the U.S. Department of Health and Human Services to end the FDA’s ban against blood donations from men who have sex with men.

Tomi Lahren tried to use Pride to attack lockdown supporters. LGBTQ people weren’t having it.