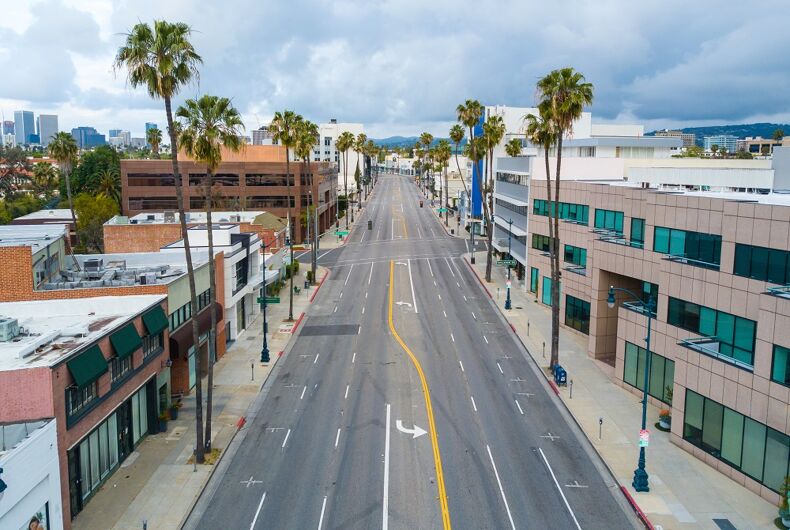 In March I did a Facebook post where I described a walk I had taken earlier that day through my home town of West Hollywood, one of the last remaining LGBTQ villages in America.

I wrote of how tragic it was to see institutions like The Abbey, one of the most famous gay establishments in the world and an institution in our city, closed up due to concerns over the coronavirus epidemic. I wrote of how these closures were absolutely necessary to protect public health but that they were temporary, and that one day soon we would have our city back in action.

It has now been two months, and the objective that was set out at the onset has been realized. The curve has been flattened, we’ve built up our hospitals’ capacity, the number of hospitalizations due to COVID-19 in Los Angeles are now low and getting lower by the day.

That’s not to say the disease hasn’t been tragic and horrific; the toll on those who have been sick and the loss of those taken by this virus is devastating. But the actions we’ve taken over the last eight weeks have worked and we are now gradually coming out of the dark times we were facing.

Welcoming this news, states around the country are now beginning to re-open. Colorado, run by out Gov. Jared Polis (D) – one of the most progressive governors in the country – started re-opening at the end of April.

California Gov. Gavin Newsom (D), who has been one of the most cautious and risk-averse governors since this pandemic started, has announced that California is once again open for business and that restaurants can start re-opening in certain parts of the state where coronavirus numbers are low.

In certain communities around our country, though, the situation is different. Here in Los Angeles County, despite the fact that it’s been two months since the start of lockdown and statistics show our collective response has worked, there is no clear timeline or end in sight to the restrictions put in place in mid-March.

Los Angeles Mayor Eric Garcetti (D) said last week that while the lockdown was extended until August we would see it gradually loosened over that time but still hasn’t offered business owners or the public any clear idea of when that loosening will occur.

Instead he and LA County’s Director of Public Health Dr. Barbara Ferrer (who has a doctorate in Social Welfare, not a PhD. in public health or an MD) have given LA residents and businesses confusing and contradictory information and orders, with no scientific rationale to back them up, that have sown more discontent and undermined public confidence in their leadership.

Let me be clear. I am a progressive Democrat who agrees with most of what Garcetti has done as mayor and detests the ignorant, reckless way that Donald Trump and the Republicans have handled this outbreak. I believe in science, I believe in facts, and I am appalled by the people who have disregarded the social distancing and safer at home rules, standing in big crowds without masks just to “own the libs” and show how tough they are. I take this virus incredibly seriously.

I am also, however, deeply troubled about the effect the ongoing lockdown is having on the small businesses that make up the essence and character of our communities, including LGBTQ villages like West Hollywood where gay businesses are already on the verge of extinction.

I don’t see being serious about coronavirus and being worried about the economic decimation of our cities and the erosion of civil liberties as being mutually exclusive. This isn’t black and white. This is an issue that requires nuanced thought and deliberation.

This shutdown is exacerbating and serving as a catalyst for the already well under way gentrification of small towns across America. If we don’t start opening things back up and allowing some of these restaurants and similar type operations to open in the very near future, I am afraid of how deep and wide the destruction of our communities will be.

The only businesses that will be able to survive are the large, corporate chain companies that we already have more than enough of.

Yet Mayor Garcetti seems to be oblivious to this. While it is true that West Hollywood is its own municipality, we are largely controlled by our neighbor the city of Los Angeles and the broader LA County. If we had more autonomy I have a feeling we would be handling things differently.

I have been disappointed by those on both sides of the political spectrum who have tried to shame and shut down any discussion or conversation about the pros and cons of these lockdowns. We should be able to have an honest and open debate. Democrats who won’t allow any alternative point of view are playing into Trump’s argument that this is a liberal vs. conservative issue. But this should not be partisan or political.

Another part of Mayor Garcetti’s bumbled and botched response has been his arbitrary order last week that just now, after two months of lockdown, requires all citizens of Los Angeles to wear masks everywhere they go, even if they are on their own or exercising, even though experts have said that the chances of contracting coronavirus while outdoors is low.

Since that order last week, I’ve noticed that fewer people are wearing masks than before. Without agreeing with their decision to not wear masks, perhaps it’s because people feel these rules from the mayor have been all over the place? People will follow rules if they feel that they make sense and are based on facts.

So far, the way the city and county have handled the pandemic has caused people to feel that this mess is going to continue forever.  We need clarity from people in power.

Some have said that we may face a second wave of coronavirus in the fall or winter. That may very well be true, but if there is a second wave, we can’t shut down again. We need to find another way. That is what we should be focusing on – let’s re-open our communities and then find a new approach in case we have to face this disease again down the line.