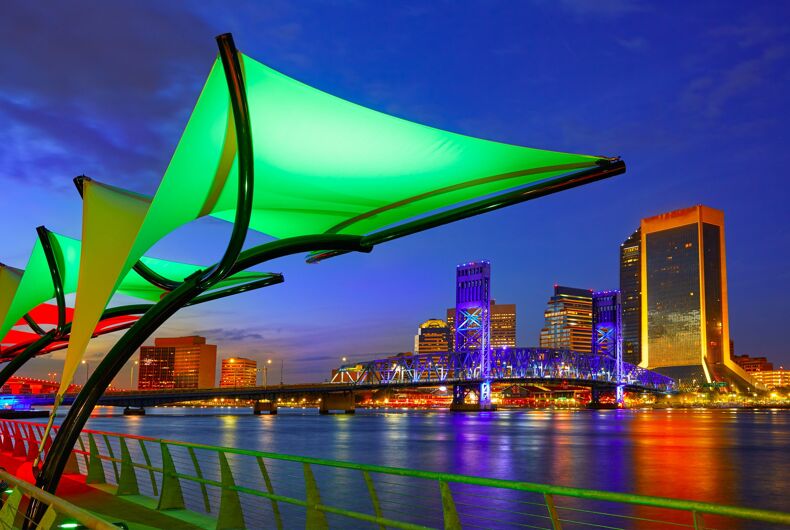 Rainbow lights from the Jacksonville skyline reflect on the waterPhoto: Shutterstock

An anti-LGBTQ legal group has successfully persuaded the 1st District Court of Appeals to strike down the Jacksonville, Florida  LGBTQ-inclusive human rights ordinance. The court ruled that its 2017 passage violated state laws, but the incoming city council president has pledged to pass the ordinance again if city lawyers don’t appeal the court’s decision first.

When the city amended its human rights ordinance in 2017 to include sexual orientation and gender identity to its 28 sections prohibiting discrimination in employment, housing, and public accommodations, state law required the city to publicly re-publish the text of every affected ordinance, showing how the insertion of sexual orientation and gender identity would change them.

Related: Liberty Counsel: “The life of the average homosexual is controlled by lust”

The city didn’t do this. Instead, they just listed the pre-existing human rights ordinances by number and wrote that sexual orientation and gender identity would be added to all of them them.

The Liberty Counsel, an anti-LGBTQ legal group that regularly challenges the expansion of LGBTQ civil rights, filed a civil suit, stating that their clients were “deprived of their right to adequate notice, and that they had suffered or will suffer injuries to their rights of privacy, religious conscience, and business interests under the Code as amended.”

This was an interesting claim seeing as the Jacksonville ordinance included exemptions for small businesses and religious institutions. But Florida law gives all citizens legal standing to challenge improperly passed ordinances or laws, whether they’ve been injured by them or not.

As such the court wrote that it made its decision “without reaching the substantive merits of Appellants’ claims,” meaning that the court never decided whether the law itself violates anyone’s religious freedom or right to privacy.

While the incoming City Council President Tommy Hazouri said the council could simply pass the ordinance again by re-publishing the full text of their updated ordinances to include the LGBTQ-inclusive language, the city’s lawyers could also appeal the decision to a higher court.

A lower court, the Jacksonville Circuit Court, had twice dismissed the Liberty Counsel’s lawsuit against the ordinance, compelling the group to bring it to the appellate court.