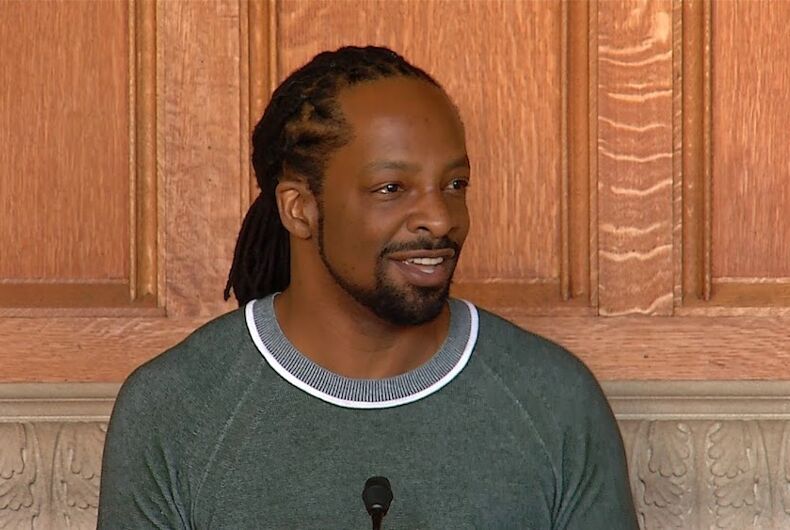 Two Black gay writers were just awarded Pulitzer prizes: Jericho Brown for his 2019 poetry collection, The Tradition, and Michael R. Jackson, for his 2019 dramatic musical, A Strange Loop. These men are now part of a proud legacy of queer writers who have won the prestigious literary award.

So we’ve included them on our list of LGBTQ writers who have won Pulitzers. This list is by no means comprehensive, so if you know of any others we should include, please tell us!

Related: Roy Moore is cashing in on the Washington Post‘s Pulitzer about his lack of ethics

According to our sister site Queerty, Brown is the first gay, Black man believed to have won the poetry prize. His poetry collection, The Tradition, explores how Americans have grown accustomed to daily terrors like mass shootings, rape, and police murders of unarmed people. The Pulitzer judges called his work “a collection of masterful lyrics that combine delicacy with historical urgency in their loving evocation of bodies vulnerable to hostility and violence.”

Teasdale won the first Columbia Poetry Prize in 1918, the award that would later be named the Pulitzer, for her 1917 poetry collection Love Song. Though she married Ernst Filsinger on December 19, 1914, literary critics have wondered about her lesbian leanings, noticing that her best poetry seems to focus on the inner emotional lives of women (like Helen of Troy and the Archaic Greek poet Sappho). She also had several intimate friends like Harriet Monroe who ran in queer art circles.

In 1923, Cather received the Pulitzer for One of Ours, her 1922 novel about a somewhat bored young Nebraskan man who finds new purpose when sent to fight on the Western Front during World War I. Although some academics have debated about Cather’s sexuality and her trove of private letters don’t share intimate details about her personal life, she never married and lived with a magazine editor named Edith Lewis for the last 39 years of her life.

Millay won a Pulitzer for her poem “The Ballad of the Harp-Weaver”, a fairy-tale poem written in child’s verse about a poor woman who, although she cannot feed or clothe her child, retains a strange harp with a woman’s head carved on it. Millay was known for her activism in feminism and reportedly slept with her female classmates in Vassar College and often wore “men’s clothes.”

Although Wilder never publicly discussed homosexuality in his life or plays, modern biographers consider him gay as he treated women non-sexually in most of his writing and personal life. He won the Pulitzer Prize for drama three times over for The Bridge of San Luis Rey (1928), a dramatic investigation about the people killed in the collapse of a South American bridge; Our Town (1938), a surprisingly deep look at love, life and death in the lives of white small-town Americans; and The Skin of Our Teeth (1943), a metafictional and anachronistic biblical allegory that tackles survival throughout the ages in the context of a family household.

This bisexual author won the Pulitzer for her 1982 novel The Color Purple, a coming of age tale about a young Black woman who experiences life in the southern U.S. from 1909 to 1949. Although the 1985 film adaptation left out the book’s overt lesbian content, queer readers have appreciated the book’s strong female characters including the seductively and disarming bisexual character of Shug Avery.

In 1999, Cunningham won the Pulitzer fiction prize for his 1998 book The Hours, a novel that examines a similar day in the lives of three women: author Virginia Woolf, Woolf’s fictional character Mrs. Dalloway, and Clarissa Vaughan, a woman throwing a party for her friend and former lover, Richard, who is dying of an HIV-related illness. Cunningham’s other works have overt gay themes as well.

McDonald, an arts critic for The Undefeated, was a finalist this year in the Criticism category. Her “essays on theater and film bring a fresh and delightful intelligence to the intersections of race and art” according to the committee. She’s also one of the smartest and most engaging young journalists in the business. She may not have won the big prize this time, but you can be guaranteed that she will soon.

Posted by Soraya Nadia McDonald on Monday, May 4, 2020

That time identical twins both came out & transitioned together

Ruth Bader Ginsburg back in hospital with infection