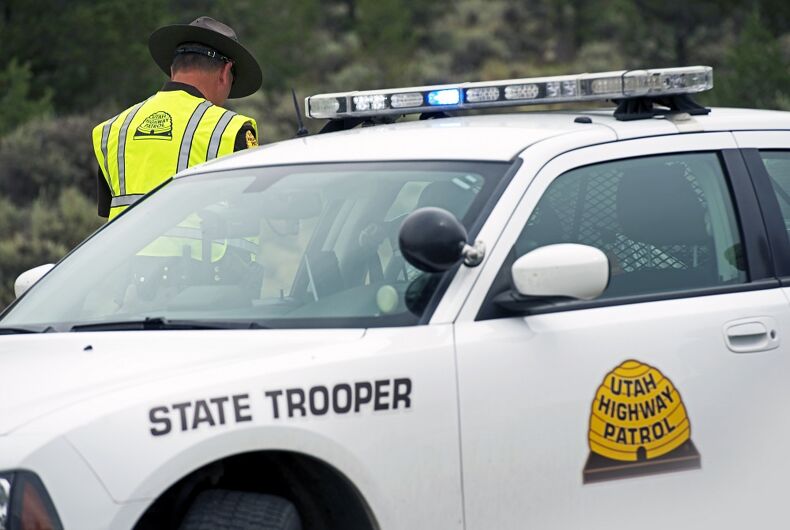 A transgender police officer says he received so little support at work and faced such severe harassment that he was driven to alcoholism and suicide thoughts before he was fired by his discriminatory employer. Now he’s suing his former police department.

Taylor Scruggs was hired by the Unified Police Department of Salt Lake City (UPD) in 2005 and was eventually promoted to a detective. When he started transitioning in 2015, though, he started having difficulty with his superiors.

In his lawsuit, he claims that Deputy Chief Brent Atkinson refused to talk to him about his cases or help him, something he did for other detectives. Scruggs said that he complained about the lack of help, and he was retaliated against and given “busy work” and then told he wasn’t being productive enough.

Scruggs alleges that his coworkers made snide comments about his clothes. Someone put a “Men Only” sign on a bathroom that was previously unmarked and that everyone used.

“I felt really alone, like I wasn’t being supported,” Scruggs told the Salt Lake Tribune. “I would go home and not feel feel that same, ‘Gosh, you can’t wait to get up and do it all over again tomorrow’ feeling.”

He said he started feeling depressed and started drinking to cope with the anxiety. He lost sleep over how he was being treated. He said that the UPD refused to implement LGBTQ sensitivity training or take other steps to make the workplace less hostile.

By July 2018, he checked himself into rehab, and he was written up for “sick leave abuse and training violations” and demoted back to a patrol officer.

In September 2018, he had a bad reaction to medication and he called a crisis hotline and said that he was going to kill himself.

In November 2018, Scruggs again tried to get gender confirmation medical care covered by his insurance. Five days later, he was fired, with the UPD saying that his call to the suicide hotline was a “threat.”

Now he’s suing the UPD, alleging they created a hostile work environment, discriminated against him based on sex and disability, and violated the Family and Medical Leave Act. He’s also accusing the UPD’s insurance of violating the Equal Protection Clause.