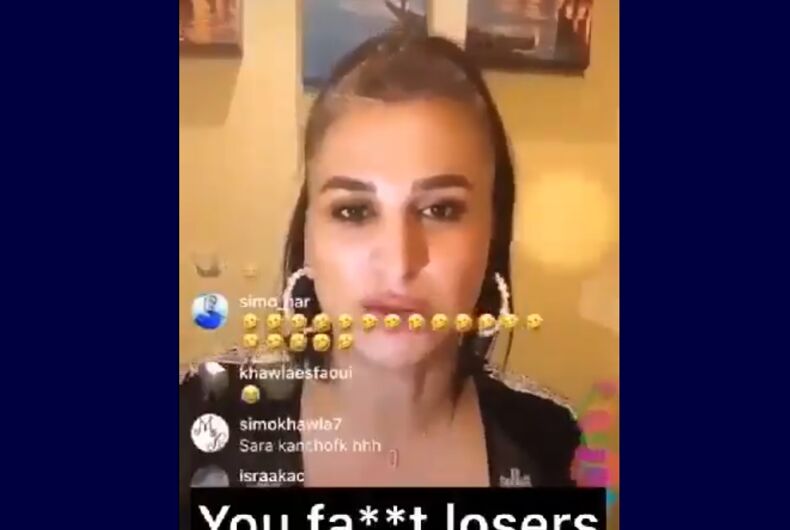 Between 50 and 100 people have been outed in Morocco as a result of transgender Instagram influencer Sofia Talouni’s videos that taught straight people how to use gay dating apps to find gay and bi men around them.

“Here I am just waiting for my death sentence,” one young Moroccan man who was outed told the New York Times. “I’m frustrated and scared.”

In an Instagram Live video several weeks ago, Talouni taught her followers how to download apps like Planet Romeo, Hornet, and Grindr to find gay men who live in their area. She showed people how to search for the apps online, install them, and create fake profiles to out gay and bi men.

“You girls should create fake profiles and choose that you’re bottoms, which means you want someone to f**k you,” she said.

Talouni is a trans woman who is originally from Morocco and now lives in Turkey. She has built a following on Instagram due to her vulgar and confrontational style, building up a following of over 600,000 people on Instagram before her account was deleted by the social media giant.

Yassine, a 22-year-old gay man in Morocco, was invited by Talouni to do an Instagram Live video. At first he said he was excited to get that kind of recognition.

But then he realized that her goal was to out him. She had revealing photos of him – she didn’t say how she got them – and she pushed him to come out on the video.

“I was shocked and then very scared,” he said. “She destroyed my life.”

“Everybody is sending the video and saying bad things about me,” he continued. “My mom, also, she’s very sad. She’s not talking to me anymore. My friends at the gym, friends I went to school with — they all blocked me.”

He was kicked out of his home and he has been forced to move to a small apartment in Tangier, a city in northern Morocco.

A 23-year-old student said that he’s now homeless after being outed online, and his friends won’t take him in because of the global pandemic.

“I have been sleeping on the street for three days and I have nowhere to go.”

A 21-year-old gay man who was studying in France but spending self-isolation with his family Rabat reportedly killed himself after his pics from an app were shared on Facebook with the people he grew up with.

“The consequences of outing can be detrimental to LGBTQ people’s livelihoods, safety, and mental health,” said Graeme Reid, who works on LGBTQ issues for Human Rights Watch.

HRW has condemned Morocco’s Article 489, the law that criminalized homosexuality with a maximum penalty of three years in prison. The organization said that the law makes “homophobic people feel empowered.”

“The Moroccan authorities should immediately step in to protect LGBT people’s privacy and repeal anti-LGBT laws that can only fuel this homophobic behavior.”

New York City-based LGBTQ activist Adam Eli worked with activists in Morocco to get Talouni’s account deleted. She then set up another account on Instagram, threatening to continue setting up accounts to spread anti-gay hate.

“Don’t think that you deleted my account,” she said in a video after her first account was deleted. “That was international organizations. You… you’re just little Moroccan f****ts. No one cares about you.”

“Personally, if I ever find out that Morocco recognizes homosexuality, I’m the first one that’s going to stand up,” she said in another video. “We shouldn’t recognize homosexuality. We are an Islamic country.”

Still, Eli said it was important to get her account deleted, and not just because it reduced her influence on social media.

“We did not solve the issue of queer-phobia in Morocco,” he said. “However, we showed a bunch of young queer people, who are scared and in quarantine, that they are not alone, that they have the force of the international queer community behind them.”

Jeff Goldblum suggested that Islam is homophobic & sexist. Is he right?