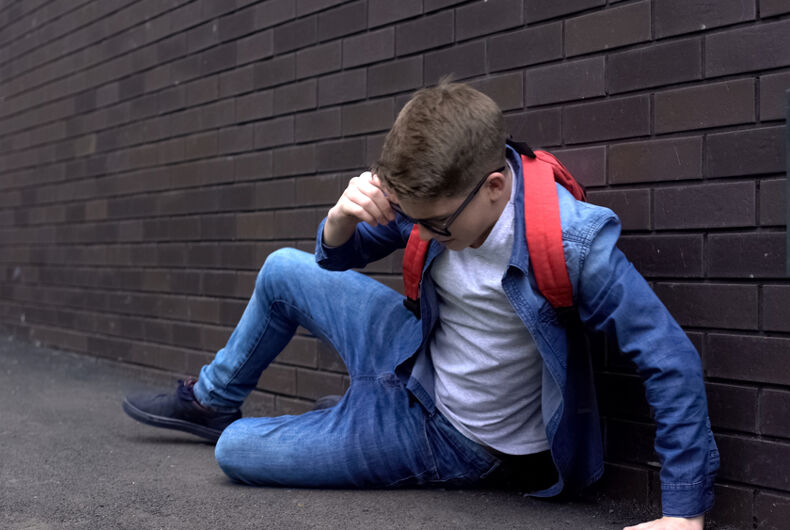 A mother in Michigan is suing her local school district, accusing school officials of doing nothing when he son was repeatedly called anti-gay slurs until he was beaten up so badly he got a concussion, developed emotional problems, and attempted suicide.

Traci Matuschek filed a federal lawsuit against Warren Consolidated Schools last month in federal court, seeking justice for how her son’s school allegedly ignored the bullying he was facing.

Her 15-year-old son came out as bisexual in August 2018, at the beginning of the school year at Sterling Heights High School. By October, he had to quit the football team because the bullying got to be too much.

“He thought [his teammates] were his friends, like family,” Matuschek said, explaining why her son thought it was safe to come out.

He was repeatedly called a “f****t” and accused of checking out the other boys in the locker room. Some of the boys on the team accused him of getting sexually excited while playing football with them.

By October, the bullying had escalated to physical violence. One player stomped on the bi teen’s head. He was wearing a helmet, but he still suffered a concussion.

Matuschek said that her son didn’t get any medical attention after the incident and the school didn’t inform his parents. When he told him what happened later that evening, they took him to the hospital and he was diagnosed with a concussion.

She said that the school took no disciplinary action against the student who stomped her son’s head. She filed a complaint with police, but no charges were brought.

So her son quit the football team since he couldn’t take the bullying anymore.

“He was getting gay-bashed in school,” the mother told Macomb Daily. “He quit something he loved. He played football since he was in the seventh grade.”

“Throughout the course of the harassment, Matuschek continually informed the administration at Sterling Heights High School about the harassment and the effect that it was having on” her son, the lawsuit says.

He got depressed and he attempted suicide by hanging himself in his room. His parents saved him just in time.

“As a direct result of the severe harassment, [the victim] became socially withdrawn, became frightened of the school environment, suffered academically and fell into deep depression,” the lawsuit says.

The bullying continued, and the son grew afraid to leave his home because some of the bullies live in their neighborhood. Matuschek said that the current quarantine has been a break for him, and they’re looking at changing school districts for next year.

The lawsuit accuses the school of violating the victim’s 14th Amendment equal protection rights. Matuschek said that the coach and the school could have intervened, but they didn’t.

They are seeking $75,000 for loss of educational opportunities, emotional distress, and legal fees.

The district is not commenting on the lawsuit.