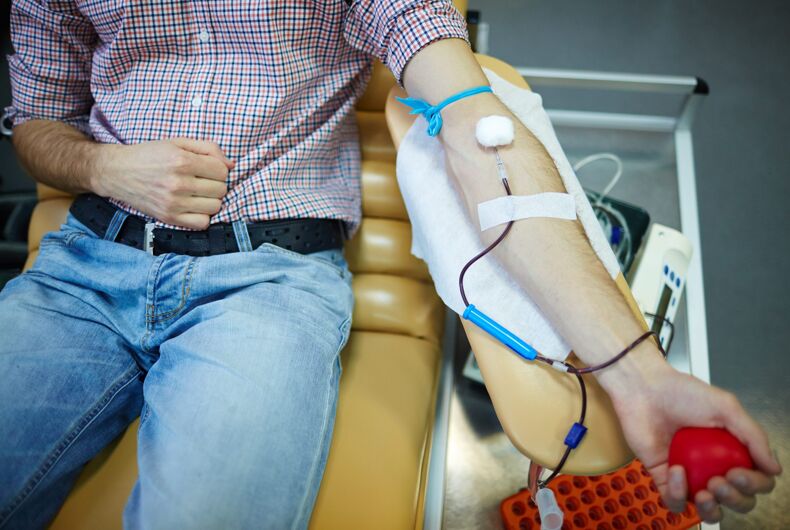 Scientists are scrambling to find a treatment for COVID-19 infection, but they’re being forced to exclude gay men who have the valuable antibodies to fight the disease. Until the ban is lifted, efforts to find a potential cure or vaccine remain hampered.

People who have contracted and recovered from the disease are being urged to donate their plasma so the antibodies can be extracted and injected into critically ill patients as part of an experiment to find a treatment for the virus that’s ravaging the world.

A government ban prevents men who have had sex with men in the past year from donating blood. With a critical shortage currently, Democrats have called on the FDA to “revise” the ban.

NBC News spoke to Sabri Ben-Achour, a gay man who recuperated from the disease and attempted to donate as part of the study. He was asked to go to a hospital to have his blood drawn and was later notified that he had indeed recovered from the disease and there was a “robust” level of antibodies in his plasma.

Doctors wanted him to return and donate blood right away.

But when Ben-Achour told them he took Truvada, a drug used to prevent HIV infection, he says they told him he couldn’t participate despite being exactly what they were looking for. Users take an HIV test every three months as required for a prescription.

“Actually, you’re not going to be able to donate because you are on Truvada,” he said they told him.

When he offered to stop taking the drug for a month, he was told he would still be excluded because he is a gay man. He would also have to refrain from sex for a year.

“We are accredited by AABB (formerly the American Association of Blood Banks) and we follow their protocols, as well as FDA guidelines,” a spokesperson for the New York Blood Center told NBC News.

The American Medical Association recommends moving away from a policy that systematically refuses to take blood donations from “categories of persons” instead of examining “individual donors on grounds of evidence-based risk assessment.”

The American Red Cross recommends reducing the time since a man’s last sexual encounter with another man from 12 months to three months as several other countries, like Canada and the U.K., have already done.

This is particularly significant now during the global pandemic, as over 4000 blood drives have been canceled in the U.S. and an estimated 130,000 blood donations have not been made. Easing restrictions on gay and bi men who want to donate blood could provide an additional 615,000 pints of blood each year.