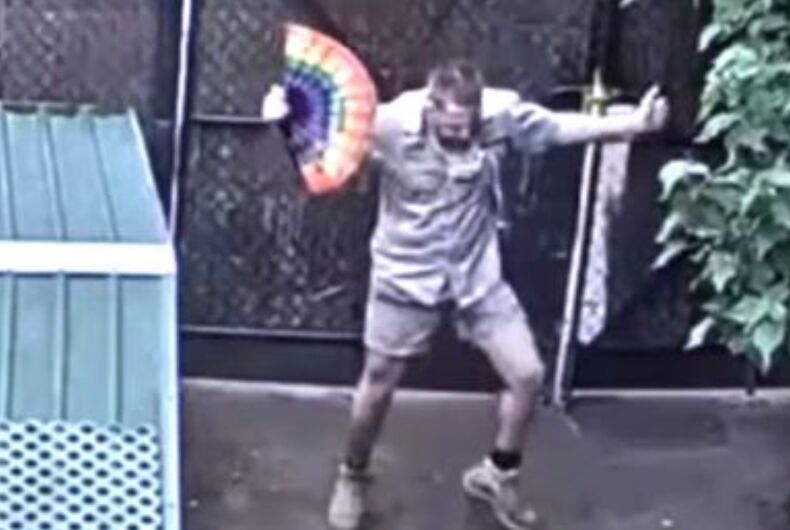 A Melbourne, Australia zookeeper has taken the internet by storm after he was caught on camera having an impromptu fan dance in the giraffe enclosure. The zoo is taking precautions during the coronavirus pandemic, but has turned on several livestreams for would-be visitors to enjoy while they quarantine at home.

One of the workers, identified only as Adam, decided to take advantage of the spotlight while he could with a good old fashioned solo dance party.

Related: This teen’s performance in the passenger seat of his mom’s car is worthy of Broadway

Adam whips out a fan, makes sure he’s found his mark, and starts showing off his moves. Even better, with a wink and a final snap of his fan, Adam walks out with a strut.

The video has quickly gone viral with social media users and news stations all sharing the footage. Since there wasn’t music heard at home, people quickly gave him a beat to complement his moves.

“Hang on, we thought this was meant to be #AnimalsAtHome?” Zoo Victoria quipped when they posted it to their Facebook page. The zoo also reports that a penguin has challenged Keeper Adam to a dance-off.

Australia has almost 2500 confirmed cases of the novel coronavirus. Eight people have died so far.

I’m a FAN of this employee of the Melbourne Zoo and his work on the live cam. I added “Rasputin” by Boney M for added sass. pic.twitter.com/iIdazdkfkX

Keeper Adam, your opponent is ready for a dance battle!

One of Melbourne Zoo's Little Penguins showed Keeper Adam who really has the moves on the dance floor 🕺 pic.twitter.com/o9DiEPXuyq