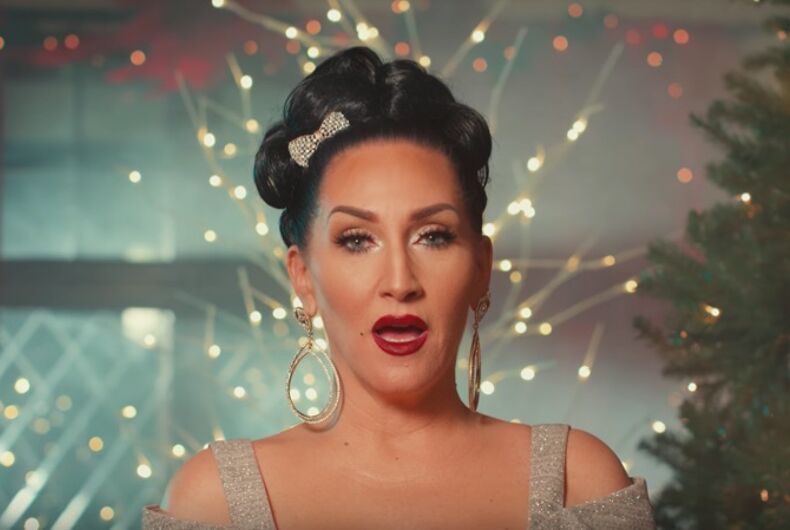 RuPaul’s Drag Race judge and former member of Seduction, Michelle Visage, said that she won’t be coming out as bisexual even though she is attracted to men and women, saying that if she did come out as bi it would take away from people who are living “a bisexual lifestyle.”

Visage talked to The Guardian about her time in New York City’s club scene. She went to the Big Apple from New Jersey when she was 17 years old to attend drama school.

It was there that she got involved in NYC’s ballroom scene.

“Being allowed in – especially being a cisgender, white, middle-class female – was unheard of,” she said. “So I felt really special and I still feel really special. It changed my life because this once not-cool girl was in with a whole group of people.”

“It was just a family. That was the most amazing feeling in the world.”

At the time, she slept with both men and women, but she doesn’t identify as bisexual.

“When I grew up that wasn’t really a thing,” she said. Bisexuality, to her, was “gay boys who would come out as bisexual first because it was easier for them.”

For Visage, her sexuality was more “if I saw a pretty girl and I was attracted to her, why not?”

Visage said that she has faced some criticism for being a judge on RuPaul’s Drag Race even though she does not identify as LGBTQ. But when she was asked if it would just be easier for her – considering her job – to come out as bi, she said, “It would be easier, but I don’t feel like the easy way out is always the right way out.”

About her place among LGBTQ people, Visage said that she has been “an ally for 30-plus years.”

“So I do consider myself part of the community,” she said. “I know how hard the community has struggled to get to where we are today, so now is not the time to start saying you can’t sit with us. We should be inclusive.”

One of her daughters is gay, and Visage said that she has seen first hand how society has changed with respect to LGBTQ people in the last several decades, in part thanks to RuPaul’s Drag Race.

“What I see is a lot more acceptance, a lot more tolerance,” she said. “I have a gay daughter, so the most rewarding thing is to see a parent stand by their queer child, whereas maybe even five years ago, they wouldn’t have understood.”