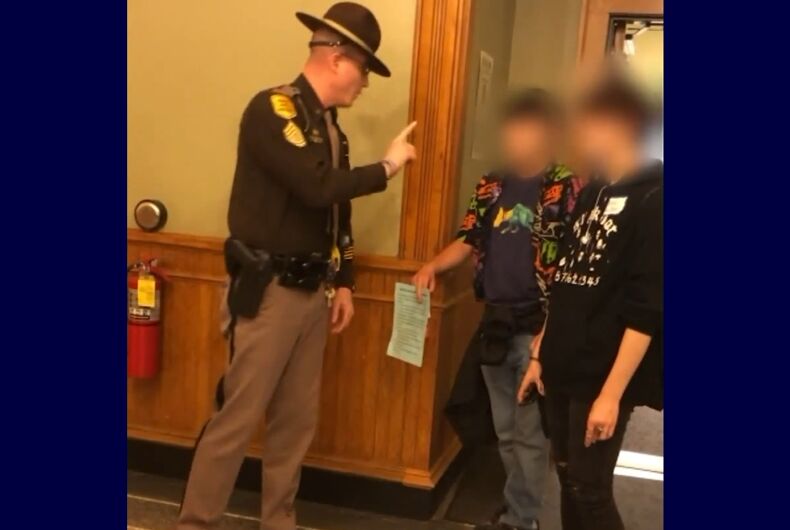 Police were caught on video berating an LGBTQ student group and then kicking them out of the Iowa State Capitol building because trans boys were using the men’s restroom.

A group of around 250 LGBTQ youth was at the capitol this past Thursday to lobby legislators as part of Students Day, an event organized by Iowa Safe Schools.

Related: The school official who demanded a trans teen pee in front of him got suspended

In a video that has been circulating online, an Iowa state trooper identified as “Sgt. Underwood” was caught telling teens that he was “not gonna put up with” students claiming that they have a right to use the bathroom in accordance with their gender identity.

“I’m not going to allow some underage female possibly to get touched or fondled or whatever else could possibly happen in there,” he can be heard saying in the video. “Your civil rights will be respected, but when it gets to some type of sexual activity….”

“So don’t even go there, you understand me? I’m not in the mood, I’m not gonna put up with that type of argument. Your civil rights will be respected but not in that incident.”

In a separate video clip, Iowa Safe Schools Executive Director Nate Munson appears to be explaining that state law protects people from discrimination on the basis of gender identity.

“Not in restrooms,” a state trooper retorted. “That is not a gender-neutral restroom. It is a male restroom.”

In a statement, Iowa State Patrol released a statement that said that they got multiple complaints about transgender boys in the men’s room.

“Capitol security requested the adult and minor females discontinue the use of the male restroom and directed them to the gender-neutral restrooms located in the capitol should they so desire,” ISP said in a statement.

ISS said that all 250 LGBTQ students were kicked out of the building “for no reason other than transphobia” in a statement.

In the statement, Iowa Safe Schools insisted that Iowa state law allows transgender people to use the restroom associated with their gender identity in public accommodations, which includes public buildings like the capitol.

The Iowa Civil Rights Commission agreed and told WHO TV that “individuals are permitted to access those facilities in accordance with their gender identity, rather than their assigned sex at birth, without being harassed or questioned.”

Iowa Safe Schools wants the troopers involved in the incident to be disciplined and they want an apology from Iowa Gov. Kim Reynolds (R). The LGBTQ organization One Iowa is also asking for more training for police officers in the state on civil rights.